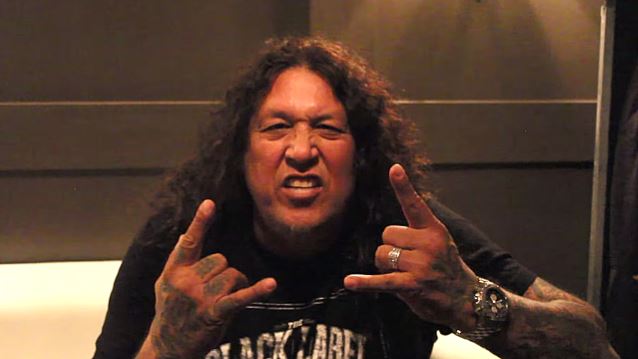 The Age Of Metal recently conducted an interview with vocalist Chuck Billy of San Francisco Bay Area metallers TESTAMENT. You can now watch the chat below.

Speaking about the progress of the songwriting sessions for TESTAMENT's follow-up to 2012's "Dark Roots Of Earth", Chuck said: "We have five or six songs demoed up. There's still probably a lot of tweaking on it, I'm sure. But, hopefully, within the next couple of months, being on the road, we can get some time to just kind of mess with some stuff."

Asked if the new TESTAMENT songs will have one unifying lyrical theme, Chuck said: "We haven't really thought about it. I don't think there's been a concept on this yet. We're just kind of writing songs. We're just getting as much songs of me and Eric [Peterson, guitar] working together, demoing. So it's advanced, but it's early, at least with the rest of the guys. 'Cause me and Eric are doing all the writing and demoing."

Regarding a possible release date for TESTAMENT's next studio CD, Chuck said :"I don't know. I can't set a date. But at this point in time in our careers, when it's ready, it's ready. And at the end of the day, we're the ones that have to live with it for the rest of our life and tour on it. So we wanna make sure it's ready. And we're fortunate to have Nuclear Blast really supporting us and not sweating us on it. They're just, like, 'When it's ready, we'll know, we'll be ready and we'll go.' So I hope towards the end of the year, it's done and finished."

In a recent interview with Josh Rundquist (a.k.a. That Drummer Guy),TESTAMENT drummer Gene Hoglan stated about the band's material: "[It] is badass; it's killer, it's good shit. And TESTAMENT fans are gonna be, like, 'Fuck yeah!'… People will be, like, 'Shit, they mean business on this record.' It's heavy [and] fast, [with] a lot of thrash stuff."

He added: "I know that [Chuck Billy and Eric Peterson's] approach — and this has been stated in the press — they kind of wanna go back to 'The Gathering' [1999] kind of vibe, and I can see that. That had a lot of fast songs on it, and that's kind of their approach that they're taking. And that's cool; that was a great record. So [I think they're] trying to write a better version of that, so I think they're gonna do it."

Billy said in an interview that would like the new TESTAMENT CD to sound along the lines of "The Gathering", "because 'The Gathering', for me, was such a turnaround record for the band. I think we really found our style and place, and the songs on that, to me, are probably gonna be some songs that stand the test of time, for sure. I think, 'cause we started experimenting with blast beats and a different style of guitar rhythms and picking on the guitars, it was different for us, and I really like where that went. So we hope that's where it all kind of ends up, and that's what we're shooting for."

TESTAMENT in January 2014 announced the departure of bassist Greg Christian and return of Steve DiGiorgio.