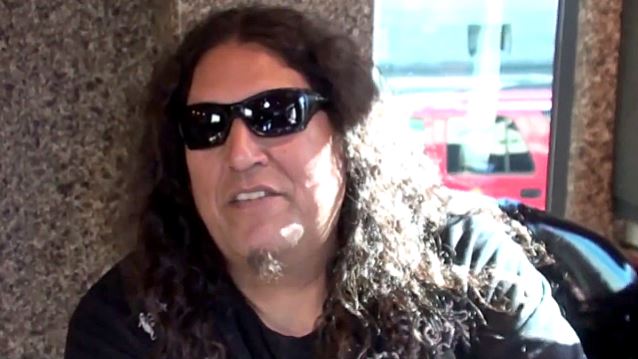 Each episode of Digital Tour Bus's "Dream Tour" features a touring act discussing who they would put on their ideal tour if there was no limits. In this episode, which was filmed on April 11 in Joliet, Illinois, Chuck Billy, vocalist for the legendary thrash metal band TESTAMENT, reveals his dream tour lineup.

TESTAMENT guitarist Eric Peterson recently told Lithium Magazine about the progress of the songwriting sessions for the band's follow-up to 2012's "Dark Roots Of Earth" album: "We're still working on it. I would say, probably, realistically, we're about halfway done. It depends on how it could just come to us and be done when I get home, or if you hit certain obstacles and different shows come up and tours. But I think the juices are starting to flow now… 'cause it's been so long, and we've been busting our balls and trying to get this record done, and I think we're getting it back into the whole vibe of what we really wanna do. 'Cause, I mean, we're on our eleventh record, and we're into this, like, 25, 30 years now. It's kind of, like, there's so many bands doing what we do, our style of music, and, I think, a band like us, when you've been around this long, you don't wanna just put out the same thing; you don't wanna do the cookie-cutter kind of thing, where you're just, like, 'Let's just copy what we did before.' For me, it's gotta come from the heart. So that's why it's taking so long. I think everybody will be stoked when it comes out."

Regarding the musical direction of the new TESTAMENT material, Eric said: "When you're beginning [as a band], you're just evolving — you're not thinking about it — but once you get to a certain plateau, you start going, 'Okay, do we wanna sound like our older stuff, or are we gonna do something like the new bands are doing now?' Like, 'You guys have gotta sound like this,' or, 'You're gonna do this. You're gonna do that.' So, I think where we're at, we're kind of choosing what record we wanna sound like, and then when I go to write songs, they don't sound like that. 'Cause it's just, like, you can't do that. Who knows what I was doing or what I was thinking when I wrote that? So, I mean, it's gonna come out. You do your best of what you're into at the time, and I really like what I'm creating right now. The stuff that I've written so far is a lot more thrashy. And Chuck is on the edge of whether he wants to do 'death' vocals or clean vocals. I prefer when he's more of a singing style and using the 'death' stuff to throw it over the fence."

TESTAMENT bassist Steve DiGiorgio and drummer Gene Hoglan were forced to miss the band's appearance at the Heavy Montreal festival in early August due to their touring commitments in Europe with DEATH TO ALL (DTA). Replacing them at the show were Tilen Hudrap from VICIOUS RUMOURS on bass and Alex Bent from BATTLECROSS on drums.