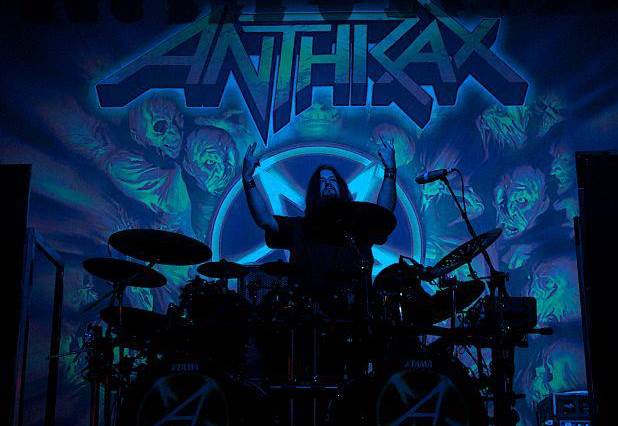 In recent years, Benante has been forced to miss parts of ANTHRAX tours as a result of an ongoing battle with carpal tunnel in his wrists. "Fine now, then two, three weeks into the tour, I need to rest a little bit and then come back," he said in an interview earlier this year. Asked whether he would have to deal with it for the rest of his life, he replied: "As long as I'm playing drums."

Fan-filmed video footage of ANTHRAX's May 22 performance in Winnipeg, Manitoba, Canada — featuring Hoglan on drums — can be seen below.

Prior to last night's concert, Hoglan tweeted a photo of him behind Benante's drum kit along with the caption: "Howdy Everybody! This starts tonight! Double duty for me...I'm stoked to keep Charlie's throne warm for him."

Hoglan previously stepped in for Benante in January 2012 when Charlie was forced to take a short leave from ANTHRAX's tour to be with his terminally ill mother.

ANTHRAX is supporting SLAYER on the first two legs of the Tom Araya-fronted outfit's last-ever North American run of dates. Also appearing on the bill are LAMB OF GOD, TESTAMENT and BEHEMOTH (with NAPALM DEATH replacing BEHEMOTH for the second leg).

Last month, ANTHRAX released "Kings Among Scotland", the band's live-in-concert DVD, via Megaforce. Captured on February 15, 2017 at the band's sold-out concert at Glasgow's Barrowland Ballroom, the two-hour "Kings Among Scotland" incorporates the band's entire live show along with interviews, behind-the-scenes footage and other B-roll shot on the band's tour bus, backstage, in hotels and elsewhere. The DVD also includes a "gear rundown" from each of the band members.

Howdy Everybody! This starts tonight! Double duty for me...I’m stoked to keep Charlie’s throne warm for him.