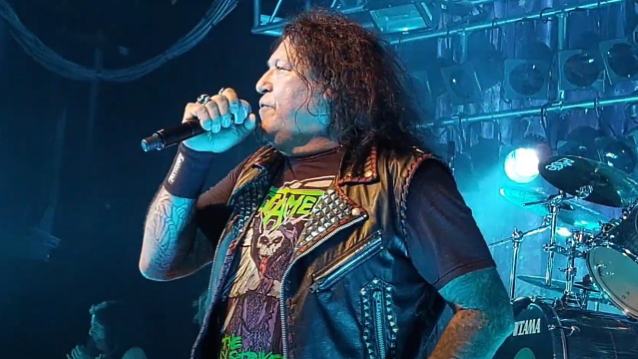 TESTAMENT guitarist Eric Peterson has confirmed to MetalMasterKingdom.com that the band is planning to begin work on the follow-up to 2020's "Titans Of Creation" album at the end of this year for a 2023 release. "We actually have a ballad that we wrote," he revealed (as transcribed by BLABBERMOUTH.NET). "We were gonna put it on the last record. We actually recorded some stuff, and it just wasn't ready. We were listening to it, going, 'Nah…' There was a lot of elements that weren't in there; we kind of threw it together. But this time I think we've got something really cool."

Regarding what the ballad sounds like, Eric said: "It sounds like something that TESTAMENT would do. The melodies in it are really cool. I'm not trying to say that we're going in a ballad direction. We're gonna deliver one of those kind of songs again; we haven't done that for a while, since [2012's] 'Dark Roots Of Earth' [album]. And then there's a lot of pieces laying around that I've recorded over the years that I haven't put drums to yet. So hopefully I'll be jamming with [TESTAMENT drummer Dave] Lombardo soon and we'll put some killer shit together."

Last month, TESTAMENT frontman Chuck Billy told Canada's The Metal Voice about the progress of the songwriting sessions for the band's next LP: "October 15th is the last show of [the summer/fall 2022 leg of 'The Bay Strikes Back Tour' with EXODUS, and DEATH ANGEL], so we'll work [on new material] right up to Christmas and then right after New Year's we'll get right back at it. I know [guitarists] Eric and Alex [Skolnick] have been working and jamming together, and I hear there's an epic song that's been created. I haven't heard it yet, but I hear it's epic. That's all they say — 'it's epic.' I'm, like, 'Okay.' That's the word they throw at me. But we'll see."

In September, TESTAMENT recruited drummer Chris Dovas (SEVEN SPIRES) to play the first six dates of the summer/fall leg of "The Bay Strikes Back Tour". He was filling in for Lombardo, who was unable to make the gigs due to a scheduling conflict with the MISFITS.