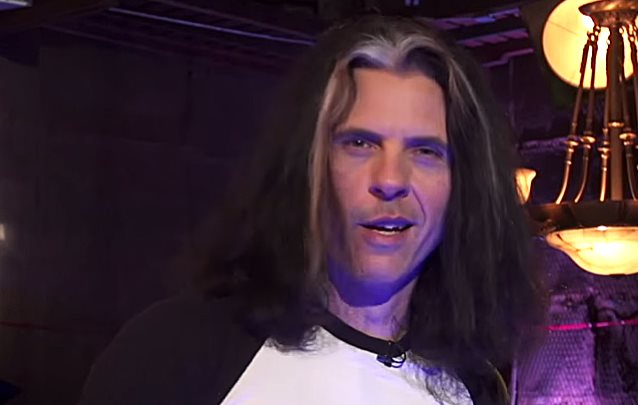 TESTAMENT's SKOLNICK On Record Industry Decline: Metal Has Suffered As Much As Any Other Type Of Music, If Not More

WSOU conducted an interview with TESTAMENT guitarist Alex Skolnick at the New England Metal & Hardcore Festival, which was held in April at The Palladium in Worcester, Massachusetts. You can now listen to the chat using the SoundCloud widget below.

Speaking about the changes that have occurred in the music industry since TESTAMENT's inception three decades ago, Skolnick said: "I think the music industry has been changing for everybody, on many levels. And it's very representative of economics. 'Cause we're seeing major corporations having record years, in terms of profit — the biggest IPO happened— but the wealth is so limited. It's locked into this very exclusive group, and there isn't much of a middle class. You see that with music too. The stadium acts seem to be doing very well, but there's so few of them and so many of the resources of the music industry go to them. So it's very tough if you're not an arena or stadium act. Yet music is something that we love so much that we're gonna do it no matter what; we have to do it. But it has been hard to see that and to feel like it's a dying industry. And metal has suffered as much as any other type of music, if not more."

Skolnick also talked about how being in TESTAMENT is different today from how it was during the group's formative years.

"We're not a new band," he said. "I shy away from the term 'veteran'; I prefer 'seasoned pro.' You know, I read a lot of the complaints about other bands. I don't obsess about Internet comments, but, you know, you see what's going on. And I think, in general, there is a sense that with this band, it's not a compromise to see us now as opposed to in our initial period. To me, that's one of the best things. It's not like we're this fading dinosaur whose best days are behind it. We're actually… For better or for worse, we never had this huge success early on that some other bands have had, so I think there's a hunger there. And, admittedly, it took a while to get things right, but I think we've gotten to become a much better-running machine."

A new TESTAMENT studio album is currently being written for a tentative early 2016 release.