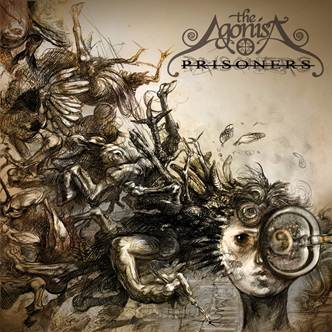 Parker Yowell of Sick Drummer Magazine conducted an interview with drummer Simon McKay of Montreal, Quebec, Canada-based melodic death metallers THE AGONIST prior to the band's May 15 concert in Baltimore, Maryland. You can now watch the chat below.

THE AGONIST's long-awaited third studio album, "Prisoners", will be released on June 4 in Europe and June 5 in North America via Century Media Records. The CD was produced by Christian Donaldson (CRYPTOPSY) and mixed by Tue Madsen (THE HAUNTED, DARK TRANQUILLITY, SUICIDE SILENCE) and it "picks right up where 2009's 'Lullabies For The Dormant Mind' left off, with soaring melodies over complex metal passages that fans of thinking-man's metal can appreciate," according to a press release.

In regards to the album artwork, THE AGONIST frontwoman Alissa White-Gluz states: "We wanted to really include a chaotic visual to reflect the chaotic sound of the band, but we also wanted to show that the lyrics on this album are a lot more introverted…The human face was left non-descript on purpose — it doesn't belong to any particular person, but we could call him the Lonely Solipsist."

In a recent interview with MetalConcerts.net, Alissa White-Gluz stated about the musical direction of the follow-up to 2009's "Lullabies For A Dormant Mind", "I wouldn't say it's heavier or more melodic. I think it sounds more mature. It has the same sort of schizophrenic side that 'Lullabies' has, but it also has some other I guess what you would call classic influences. Like, there's some PANTERA influence, there's some RADIOHEAD influence. I mean, there's a lot of influences that we didn't really have before."