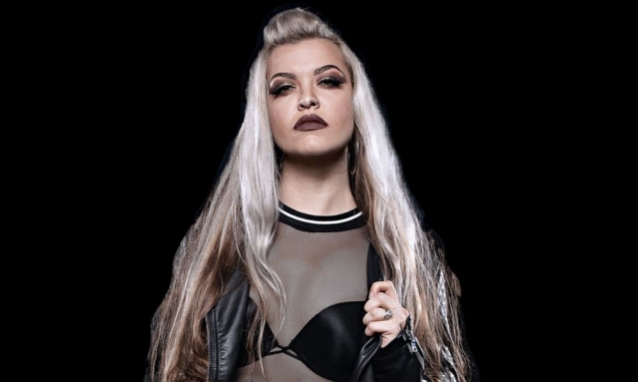 THE AGONIST's VICKY PSARAKIS On 'Orphans' Album: 'We Didn't Overthink; We Just Stayed True To Ourselves'

A&P Reacts recently conducted an interview with frontwoman Vicky Psarakis of Montreal, Quebec, Canada extreme metallers THE AGONIST. You can watch the entire chat below. A few excerpts follow (transcribed by BLABBERMOUTH.NET).

On what inspired the title of the band's latest album, "Orphans":

Vicky: "Honestly, the main reason behind it, how we got the idea, I kind of said we've never named an album after a song on the album before. So, I was looking through the track listing and I saw the song 'Orphans', and it just stood out to me. I was, like, 'Oh, this would be a really great album title as well.' And then the reasoning behind it, there are actually multiple reasons that kind of coincided afterward, after we decided it. I think the main reason for me is that 'orphans' is just such a negative word when you hear it like if you hear that someone's an orphan, you feel bad. You feel sorry for them or whatever, but you hear some exceptional cases of people in the world that overcame all those difficulties growing up, and became hugely successful. To me, it's one of those things where you can take something that's negative and a negative situation and throw on your own spin and turn it into something positive. I feel that's kind of the vibe on all the songs on the album, too. The lyrics may be talking about something negative, but there's always a positive aspect in there somewhere. I just felt it really represented the album."

On THE AGONIST regularly blending multiple styles into its sound:

Vicky: "I can't speak for everyone in the band. I know how Danny [Marino, guitar] sort of writes. I've stayed with him a lot of times when I'm in Montreal. I know he picks up a guitar when he's on his couch, sometimes even watching Netflix. He'll just pick up a guitar and suddenly start playing random stuff, and if he plays a cool riff, he'll go, 'Oh, I like this. Let me put it down so I can remember it.' He continues and grows the song from there. But I think it does widely depend on the influences that he's had throughout his life, but also the more recent ones and I think that goes for everyone. If you hear this new band and you're super into it and you're listening to it non-stop, that's kind of going to go into your own music whether you like it or not. I think that's why THE AGONIST has always sort of dipped its toes into so many different genres. But I think for this album, we didn't overthink; we just stayed true to ourselves and let whatever creativity come out, we embraced it. I know that on my end, I did the same thing when I got the songs from Danny. I would listen to a song and go, 'Okay, what emotion am I getting from this song?' Then write the lyrics according to that. I didn't try to overthink it or anything like that."

On developing her vocal technique:

Vicky: "I never ever stop working on my vocals. Ever since I started singing, I have this sort of thing in my head that I'm a perfectionist, even if I do something I'm in the moment really proud of, I'll go back and listen to it a week later, a month later, I'll always be, 'You can do better. You can always do better.' I already feel like that about 'Orphans'. I know it's not like that for everyone else, but it's been a year since I recorded that. I'm already in my head, 'Oh if I did this today, it would sound even better.' Yeah, I think it's A, my curiosity how different styles of vocals are done. Every time I hear something new or something really impressive, I'll be, like, 'Wow, how's this person doing this? I really want to learn how to do it with my voice.' And B, the fact I feel like I could always be better as a vocalist. I wouldn't say that I put more effort into 'Five' from 'Orphans'. I think that was the time period where certain things clicked in my head, versus other times in my life in the past where it might have taken me a bit longer to get from A to B, let's just say it happened faster in between these two albums."

"Orphans", THE AGONIST's sixth album (and third with Psarakis),will be released on September 20 via Rodeostar/Napalm.