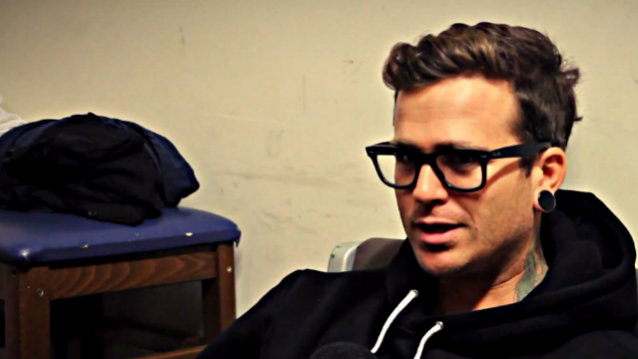 Impericon.com recently met up with vocalist Joel Birch of Australian metalcore masters THE AMITY AFFLICTION and asked him "25 important either-or questions." Check out the clip below.

THE AMITY AFFLICTION's new album, "Let The Ocean Take Me", sold around 10,000 copies in the United States in its first week of release to land at position No. 31 on The Billboard 200 chart. The record arrived in stores on June 10 via Roadrunner.

Urgent, aggressive, and remarkably cathartic, "Let The Ocean Take Me" is THE AMITY AFFLICTION at its most vital best. Recorded by producer Will Putney (WINDS OF PLAGUE, UPON A BURNING BODY) at guitarist Troy Brady's Evergreen Studios in Brisbane, the album pushes the band's signature post-hardcore approach to new heights of richness and diversity, providing the consummate aural partner to Joel Birch's increasingly more potent lyricism. Inspired in part by a near-death experience suffered during last year's Vans Warped Tour, songs like "Don't Lean On Me" and "FML" are fueled by desperate emotion and intense anxiety but achieve extraordinary transcendence through radical honesty and raw power.

"(The album) is about really trying to find a positive in my life again," Birch says. "Writing these songs was a very cathartic process, but I'm terrified of people listening to them and reading these lyrics because they'll know exactly what I'm thinking. I'm hiding nothing."