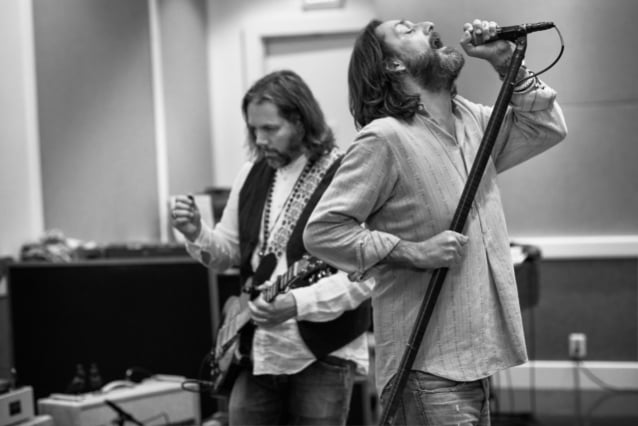 Matt Pinfield recently kicked off his "New & Approved" KLOS rock show with THE BLACK CROWES frontman Chris Robinson. Robinson spent some time discussing his life amid the pandemic which has rendered much more family time for the Georgia native. Now reflecting back on the beginning stages of the CROWES, formerly known as MR. CROWE'S GARDEN, Robinson shared moments of old recording sessions and the creativity and passion that came from the band's earliest recordings. The 54-year-old musician spoke about the 30th-anniversary reissue of "Shake Your Money Maker" which features not only a new single offering from the band with the song "Charming Mess" but never-before-heard studio recordings and demos. Robinson also spoke with Pinfield about BLACK CROWES' early influences, past touring experiences, what it felt like getting back on stage before the pandemic impacted live shows, and much more.

On the topic of what it was like to perform with his brother, THE BLACK CROWES guitarist Rich Ribinson, again in November 2019 after a six-year break, Chris said (see video below): "The whole full-circle part of it, that felt amazing. The first day Rich and I got back in a room for auditions for [new touring members of THE BLACK CROWES], I kind of was, like, 'Oh, wow.' I forgot — in the best way… You know what I mean? All the ugly stuff aside, that brothers — Rich and I — the way we would handle things, to go away from it for so long and for both of us to immerse ourselves in our solo careers and not beating each other, for us as brothers and as bandmates, it was an amazing experience, because then we could get back together and it's, like, wow, we don't really have the pressure of the gravy train of THE BLACK CROWES or this part of THE BLACK CROWES or this and that. It was just where it starts, which was with me and Rich. And it was, like, wow, I can really enjoy this music. I had been in my world, doing my music, and to get back with the music I made with Rich that's really rock and roll, it's, like, wow, this is what I wanna be doing. I miss this feeling. I miss this sound, this kind of music. And in my case, personally, to put a lot of my ego stuff and my resentment and my, 'Oh, I was hurt by this,' or whatever, to put all that stuff aside and really see how important Rich is… Rich and I both created this. It's an equal thing. It's a yin and yang in a real sense."

He added: "Focusing on 'Shake Your Money Maker', celebrating this music and not having to bite off too much other stuff really, really made it uplifting to me somehow."

"Shake Your Money Maker" will be re-released in multi-formats sets on February 26 through UMe/American Recordings. The album, fueled by singles "Jealous Again", "Twice As Hard", "She Talks To Angels" and a cover of fellow Georgian Otis Redding's "Hard To Handle", has sold over five million copies.