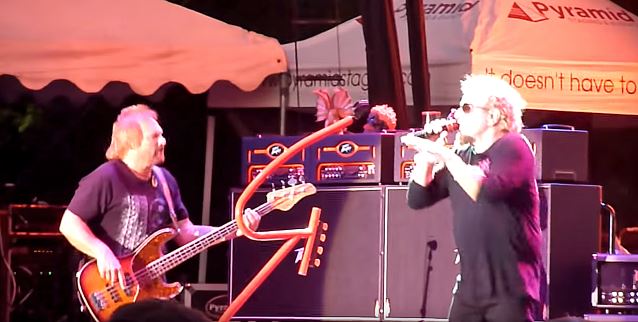 THE CIRCLE, the combo consisting of legendary rocker Sammy Hagar alongside Michael Anthony, Jason Bonham and Vic Johnson, performed at the Tulalip Amphitheatre in Tulalip, Washington on August 24. Fan-filmed video footage of the concert can be seen below.

THE CIRCLE released a concert album, "At Your Service", in May 2015. Recorded live on tour in 2014, this release documents the blistering performance of a band on fire performing hits from Sammy's four decades of rock (MONTROSE, solo, VAN HALEN, THE WABORITAS, CHICKENFOOT) as well as classic tracks from the LED ZEPPELIN catalog.

He continued: "THE CIRCLE is so satisfying that I don't even see a reason to make a record. We have so many great hits that we can choose from our catalog, all of those VAN HALEN hits, all of the Sammy solo, all of those MONTROSE hits, CHICKENFOOT hits, LED ZEPPELIN songs — we have that catalog to choose from for our shows, so to make a record would just be kind of a waste of time. I wouldn't say never, but first I'd like to put together the greatest set list that ever existed in rock 'n' roll, and I think we're pretty close to it right now with the one that we have, but it can even get better. There's a frikkin' goldmine to choose from of songs that I've written and sang in my life."

After his stint as lead singer of MONTROSE, Hagar launched a successful solo career before joining VAN HALEN in 1985. During his time with the band, they notched four consecutive No. 1 albums before breaking up in the mid-'90s.