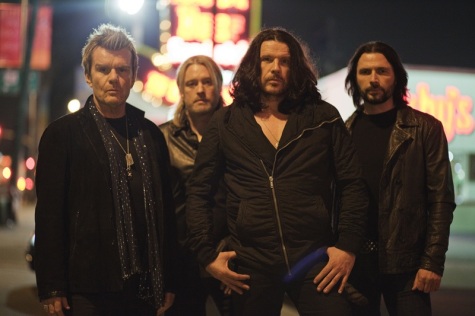 THE CULT Frontman: 'There's No Intention Of Trying To Emulate Any Of Our Previous Recordings'

Giorgio Mustica of The Aquarian Weekly recently conducted an interview with THE CULT singer Ian Astbury. A couple of excerpts from the chat follow below.

The Aquarian Weekly: What was it like working with producer Bob Rock again?

Astbury: Well, working with Bob is always a pleasure. He's a friend but he's also a very strong taskmaster. He doesn't allow for any whining in the studio. He will not tolerate any diva behavior. It's like, you're in there, it's about business, it's about getting down to brass tacks. I'll say that Bob was very gracious in taking over from Chris Goss. Chris Goss really did kinda like the lion's share of the work on the record. We worked through Chris for the "capsule" collections, which we did in 2010 to 2011, and that's what really helped [the band] make another album, because the material we were running through with Chris was so strong and we really just wanted to continue that relationship. But the relationship was very, kind of like, much more in the realm of kind of gathering raw material and developing that into raw structures and there's a point when it needed some kind of finessing, not polishing, but kinda more…needed some conclusion, needed to be completed. We were kind of like, out there for a while with Chris and we'd all pretty much exhausted the room and I thought there was only one person that could really get in here, get in deep with us very quickly, and that was Bob Rock because Bob knows us very well — this is our fourth record with him, so yeah.

The Aquarian Weekly: Do you think this album ["Choice Of Weapon"] compares with any others from THE CULT?

Astbury: You can probably compare it to everything if you wanted to. Maybe for comparisons for the perspective of being subjective and trying to explain it to somebody or share with it, but there's no intention of trying to emulate any of our previous recordings. We were very adamant about going in, seeing where we were at right now, and we wanted to capture that as authentically as possible so the real focus was really on the now. It was really on the now and I think that's one of the reasons we kind of like — we've been through periods, I think the period between "Sonic Temple" and "Ceremony" showed that when you kind of like, look in the rearview mirror a bit and there's expectations out there and you start listening a little bit to those Twitterers, so to speak, that you can kind of get in the head game. You start second guessing yourself and doubting and you start making some choices based upon, maybe, external opinions or even assumptions on our part. I think "Ceremony" was kinda like "Sonic Temple" part two or "Sonic Temple" the outtakes with so many good songs on it and I think that's why when we did the '94 record ["The Cult"], we basically scrapped everything, destroyed everything, and went back to kind of like, a garage record, for all intents and purposes. We've learned a lot over the years and I think this record is a really balanced, authentic document of where we're at right now and it's relevant, certainly in terms of its subject material, the tonalities, the sentiment of the record, the performances — it's all done to the best of our abilities and it's done, it's in the can, and now we're gonna go out and perform it live.

The Aquarian Weekly: You previously stated that "Born Into This" was likely to be your last album yet here we are with "Choice Of Weapon". What made you want to record another CD?

Astbury: I don't know, it's like saying you're not going to have another kid. It's like, that's it. And I think it was really my reaction to the music industry's demise. We decided we're going to take the reins into our own hands. I wanted to create a format for the 21st century so I came up with the idea of the capsules — releasing music every three months, two new songs, two new live songs recorded and a visual element on all formats and I thought it was a great way of releasing music. I thought that could be the new standard of releasing music, a new precedent set. But then, in some ways, it was ahead of the curve, and we didn't have the infrastructure to support it. We didn't have a label, we were doing it ourselves, a lot of industry was going into it and it was just so much industry. You think you release a record, it's easy. You release it and it goes out, but somebody has to do publicity, somebody has to do marketing, etc. — the fact that we've become a label, we were looking at each other going, "This is just a lot of hassle." And then we've got people banging on the door saying they want to do an album, labels, and then we have hardcore CULT devotees going, "This is incredible, we want more, we want it now." So then we're in the room with Chris Goss and Chris is going, "I'm going to keep going with you guys, did you want to keep going?" And we're like, "Okay, cool, let's do it." So I capitulated, threw up the white flag and said, "Okay, I know I'm going to take a beating for this but…" And it was actually really cathartic, it's more difficult to say yes than it was no, so I said yes. I made the difficult choice and I felt like I was going back on my laurels in some way but then once I got in the room with Goss and we started doing things like "Life > Death", "Elemental Light", "This Night In The City Forever", "Wilderness Now", we were getting into deep songs and I was like, "Whoaaaa." We've never been here before and this is exciting so I was like, we're staying with this. Let's see where this is going to go.