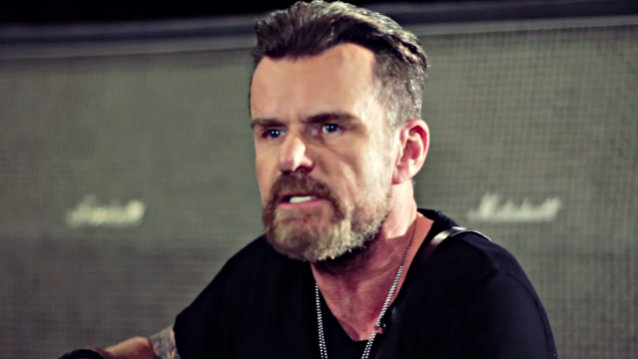 During a brand new interview with Michael Christopher of Vanyaland, THE CULT guitarist Billy Duffy spoke about the progress of the songwriting sessions, and the musical direction, of the band's next studio album, which is not expected before 2015 at the earliest.

"I don't think it will be like [2007's] 'Born Into This'; I think it will be more guitar heavy," he said. "That was a 'guitar-light' album for a lot of reasons that I won't get into, but it seemed a little guitar shy for a CULT album for my ears — but I am biased.

"We're not far enough in [the songwriting process for the next CD]; we've got completed songs, but there isn't really enough of a cross section of material to figure out what it's gonna be like yet. I don't see it being a quantum departure; I don't think it's going to be too bonkers. I don't know — for all I know, Ian [Astbury, vocals] wants to make an electro dub dance album."

Duffy also commented on the incident at THE CULT's August 2013 concert at Revolution Live in Fort Lauderdale, Florida when a fan attending the show was ejected from the venue by Ian Astbury for allegedly texting and being disrespectful during the performance.

"I was right there, I saw it go down and that's a particularly extreme example," Duffy said.

"That particular person, he wasn't cool. And I don't understand why you would want to stand for hours in front of a venue waiting for us to come on to not be present. That's what makes humans interesting species — they're all weird.

"I'm supportive of [Ian] on that. I think it was a good point, actually. It's funny, a lot of the time with Ian he seems to crack a walnut with a hammer, but I think it opened up a debate. You walk out on stage every night and you give something to the fans, and they've got to give something back. That's why live music is still valuable; it's a unique experience."