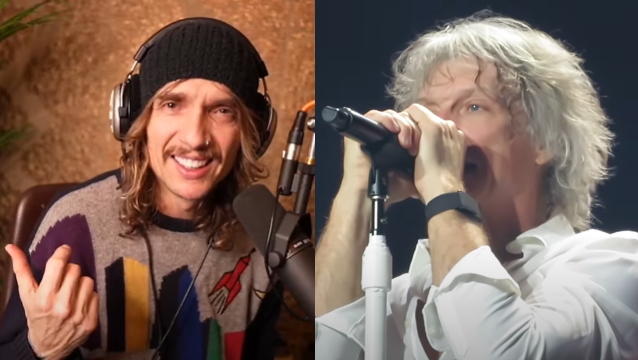 THE DARKNESS Singer On JON BON JOVI's Vocal Issues: 'The People Around Him Need To Tell Him To Stop'

THE DARKNESS singer Justin Hawkins has weighed in on Jon Bon Jovi's vocal performances during BON JOVI's recent U.S. tour which kicked off April 2 in Omaha, Nebraska. The tour was in support of the album "2020", which was released in October of that year.

The 47-year-old British-born rocker, who currently lives in Switzerland, offered his assessment of Jon's singing ability via his YouTube series "Justin Hawkins Rides Again" where he shares a mixture of serious musician analysis and fun hot takes to his 120,000 subscribers.

After watching a couple of fan-filmed videos of BON JOVI's 2022 tour, Hawkins said in part (as transcribed by BLABBERMOUTH.NET): "My career is not as long as Jon Bon Jovi's, and not as big as well. Even at the level that we've experienced, if you're in a situation like that and you can't deliver the goods and you can't give your audience what they deserve, that's horrible — it's a horrible feeling — and you don't enjoy touring in that condition; you just wanna go home. And I expect he's feeling the same way, really. But there must be a huge machine around BON JOVI that stops him from being able to pull the plug on it, really, which is what needs to happen, I think. I mean, I'm not talking about pull the plug forever.

"It sounds like he needs some kind of therapy," Justin continued. "And I think a lot of the time, a situation like that… It doesn't sound like it's a polyp or some sort of lump on his vocal cords 'cause that would be more unpredictable — he would be hitting the notes and then it would squeak off and it would do something unexpected. You know that sort of sound when you're entering puberty and your voice becomes unpredictable. Sometimes when you have a growth or a lump on your vocal cords, it can cause that kind of… Unexpected things happen to your voice. Even if you're an experienced singer and you can just hold a note, it will squeak off when you're not expecting it, and it's very hard to sing around those things. But that's not what's happening here. This sounds like he's super tired. Everything's [tuned] down, but he's still… You have to sing a lot with an adjusted key like that to find the sort of muscle memory in your vocal cords anyway, but he's struggling with that, not because it's low; it's just 'cause he's tired. And I think he's psychologically… I don't know… It sounds like something he's gonna need some therapy with — actually talk to somebody and try and coax the performances back out. It doesn't sound to me like there's damage in there. I'm not a doctor but I've experienced voice problems before. And to hold a note with it being off key suggests some pitching issues that might be to do with hearing as well.

"It's not fun to watch this and it isn't fun to regard one of the greats. He's a great singer — he always has been — but this sounds like something is eating away at him from the inside. And I don't think it's a voice injury; I think it's more of something like a manifestation of performance anxiety that's stopping him from delivering his trademark Gale Force 10 mega vocal that you need on these huge tracks, these anthemic mega hits. And I feel like the people around him need to tell him to stop. It must be difficult when… I suppose if you're afraid of getting the sack, I suppose it's difficult to talk to a singer in that way. I don't know what the dynamic is in their organization, but I think if I was working for Jon Bon Jovi and I cared about the 'brand,' I would ask him to consider canceling the tour and getting some medical attention.

"It saddens me to see it," Justin added. "I'm sure we're all disappointed."

In his review of BON JOVI's April 3 concert at Xcel Energy Center in Saint Paul, Minnesota, Ross Raihala of the Pioneer Press called Jon's vocals "shockingly poor," adding that Bon Jovi "struggled throughout the two-plus-hour show. He wasn't just butchering the older stuff, which the band now plays in a lower key, but the fresh material as well… Quite frankly, it felt like he had forgotten how to sing."

Théoden Janes of The Charlotte Observer was a bit kinder in his assessment of Jon's voice at the fourth concert on the new tour, which came to Spectrum Center in Charlotte, North Carolina on April 8. In his review of the performance, Janes wrote: "Throughout the band's rendition of 2004 promo single 'The Radio Saved My Life Tonight', it felt like [Jon] was searching for the right note and only finding it 60 to 70% of the time. During every chorus of megahit 'You Give Love A Bad Name', he seemed to unintentionally be singing a little behind the beat, and on top of that, there wasn't much punch to his vocals — yet he inexplicably seemed somewhat out of breath in spots. On another big anthem — 'It's My Life' — he once again was quite clearly veering into and out of key. And those were just three out of the first five songs."

Kevin Coffey reviewed BON JOVI's tour kick-off concert for Omaha World-Herald and noted that "[Jon's] voice's heft, which carried choruses of songs like 'Livin' On a Prayer' and 'It's My Life' is now reedy. He sounds thin. There's not a lot of tone in his voice. He can't quite hit the notes… Luckily for Jon Bon Jovi, he had the help of six additional musicians and their considerable vocal abilities to keep him afloat."

After BON JOVI's summer 2020 tour was canceled due to the COVID-19 pandemic, the now-60-year-old singer remained in the public eye by performing at benefit shows, livestreamed gigs and taking part in promotional appearances.

Last October, Jon Bon Jovi canceled his appearance at a Miami Beach concert after testing positive for COVID-19, the disease caused by the novel coronavirus. The singer, who is said to be fully vaccinated, pulled out of the fan event minutes before he was supposed to take the stage for an acoustic Halloween performance at the Loews South Beach.