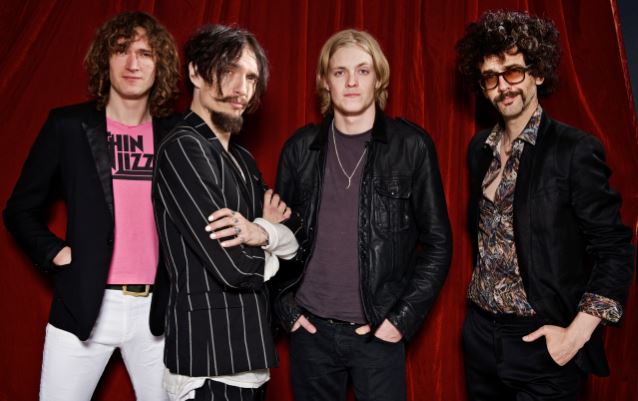 British rockers THE DARKNESS will re-release their fourth album, "Last Of Our Kind", on November 20 as a "deluxe edition" featuring four new tracks. "Messenger", "Always Had The Blues", "Million Dollar Strong" and "I Am Santa". They join the phenomenal original ten tracks which were unleashed earlier this year to critical acclaim. "Million Dollar Strong" will be available immediately to people pre-ordering a copy of the deluxe album.

Check out "Million Dollar Strong" in the YouTube clip below.

THE DARKNESS's "Blast Of Our Kind" tour will commence on November 28 in Norwich and culminate in a triumphant show at London's Roundhouse on December 20. It is the first, and a golden, opportunity for enthusiasts to see THE DARKNESS on their own stage in support of "Last Of Our Kind" and their first tour since 2013. The band will play tours in the U.S. and Australia before the end of the 2015 and head to Europe in the New Year.

THE DARKNESS in April parted ways with drummer Emily Dolan Davies and replaced her with Rufus Taylor, the son of legendary QUEEN drummer Roger Taylor.

Rufus made his debut with THE DARKNESS at the Gibson release party for "Last Of Our Kind" in London on April 24.

Speaking about THE DARKNESS's latest addition, frontman Justin Hakwins told Kerrang! magazine: "It felt like a revelation. We had a lot of mutual friends, and as it would turn out, Brian May's guitar tech put him forward for the gig. There's something really special about his drumming. So, yeah, we want to work with him for as long as we can. This is THE DARKNESS, though, so things can change in a heartbeat."

Regarding Rufus's predecessor, Justin said: "We love Emily. She's a great drummer and a nice person, but it broke down because she couldn't be available for everything we needed. I think we're quite a demanding band to be in…"