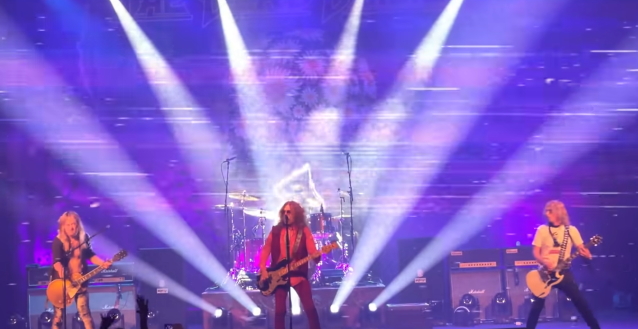 THE DEAD DAISIES took the extremely enthusiastic and vocal crowd on a trip down memory lane with "Long Way To Go", the classic hit from their 2016 album "Make Some Noise". It's been a crowd favorite and always in the setlist at live shows. The song took on new life with lead singer Glenn Hughes and the drive from the engine room with Tommy Clufetos on drums and the dynamic dueling guitars of Doug Aldrich and David Lowy.

Lowy said: "It's a hard-driving rock and roll track with great significance to the world's predicaments today. What's really cool about the riff is the first two bars are 4x4 and the third bar is 2x4 which gives it a really interesting feel. It's a very meaningful track to us as the music is an ode to my friend Doc Neeson and the lyrics that John Corabi came up with are very poignant."

In January, THE DEAD DAISIES announced the return of drummer extraordinaire Brian Tichy to the musical collective of Hughes, Aldrich and David Lowy.

THE DEAD DAISIES will embark on a massive pan-European jaunt this summer consisting of arena and amphitheater shows with JUDAS PRIEST, FOREIGNER and WHITESNAKE, festival appearances and a number of headline dates.