THE DEVIL WEARS PRADA To Tour U.S. With MEMPHIS MAY FIRE, SILVERSTEIN, LIKE MOTHS TO FLAMES

THE DEVIL WEARS PRADA will hit the road this fall, co-headlining "The Rise Up Tour" with MEMPHIS MAY FIRE. SILVERSTEIN will be the special guest and LIKE MOTHS TO FLAMES will open all dates. The tour kicks off in Denver on October 11 and will take the bands cross-country, wrapping up in Berkeley, California on November 4. Tickets go on sale this Friday, August 8.

For these dates, THE DEVIL WEARS PRADA — Mike Hranica (vocals),Jeremy DePoyster (rhythm guitar, clean vocals),Andy Trick (bass) and Kyle Sipress (guitar) — will be joined by drummer Giuseppe Capolupo, who also appears in the band's "Daughter" video. The group's setlist will feature songs from the vast bulk of their entire five-album, two-EP catalogue.

Confirmed dates for the North American leg of "The Rise Up Tour" are as follows:

THE DEVIL WEARS PRADA will release its sixth full-length album, "Transit Blues", on October 7 via Rise Records. It follows last year's "Space" EP that bowed at No. 18 on The Billboard 200 and earned widespread acclaim.

The band retreated to both Watertown, Wisconsin and Sawyer, Michigan last winter to write "Transit Blues", for the first time living and creating in a shared, full time space. They re-teamed with "Space" producer Dan Korneff (PIERCE THE VEIL, MOTIONLESS IN WHITE) in the spring of 2016 to record the 11-track effort. Overall, the album reflects themes of transition, separation, and mourning. 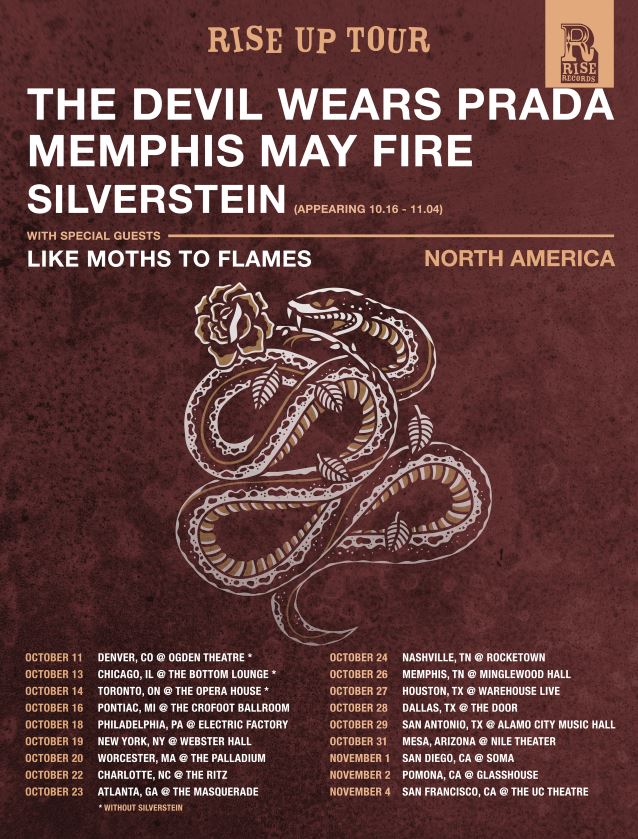