THE DILLINGER ESCAPE PLAN guitarist Ben Weinman has spoken to U.K.'s Rock Sound magazine about the rumors that the band has hired drummer Billy Rymer of the Long Island, New York-based progressive rock act THE RIVALRY as the replacement for the recently departed Gil Sharone.

"I don't want to say to much about the new guy," Weinman said when probed on the group's new drummer. ''He is kind of this secret weapon and we are excited about the fact that he doesn't care about running around promoting himself. He is pretty unknown and got the gig over like thirty ridiculously sick drummers. Some of which are pretty well known. He has very young nipples, though, I must say; makes me jealous."

Weinman also wanted to set the record straight with regards to the band's departing drummer Sharone. "I would like to clear up the reality of that situation," he continued. ''It seems everyone is trying to play up that we can't keep members in this band. Gil didn't quit DILLINGER and there is no animosity. We are still friends and were talking about a project we are going to work on when we both have more time yesterday.

"The fact of the situation is that he both didn't like a lot of touring and felt guilty he had gone over a year without really giving his band [STOLEN BABIES] that he started with his twin brother much attention. He wanted to move forward in writing and doing selected shows with DILLINGER but asked if we would be interested in getting a touring fill-in for when he couldn't do it. We decided to go another route and he was understanding of that. That is the reality of the situation."

THE DILLINGER ESCAPE PLAN took part in the 2008 Warped Tour and a cross-country trek with CAVALERA CONSPIRACY.

The band is currently home in the early stages of writing for its follow-up album to "Ire Works". 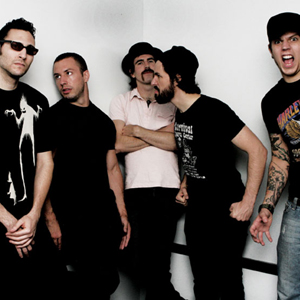