Billy (see photo below) grew up living the small town life of Long Island. It was there that upon receiving his first drum set on his eighth birthday, he made a commitment to his craft that has brought him to experience a plethora of professional situations. Throughout his musical career, Billy has had the opportunity to share stages with such artists as 311, ALIEN ANT FARM, MATISYAHU, KELLY CLARKSON, THE JONAS BROTHERS, LIFEHOUSE, AMERICAN HIFI, BLOODHOUND GANG, BIOHAZARD, THE RECEIVING END OF SIRENS, Wes Borland of LIMP BIZKIT, THE SLEEPING and more. His styles and approach to the drum set range from a wide variety of musical genres. Billy has put in his hours studying the fundamentals of rock, reggae, jazz, tribal, drum n bass, dub, Latin, funk, jungle, hip hop and R&B drumming.

"He didn't leave and we didn't kick him out," Weinman told Kerrang! magazine in September. "He will be busy, though, working with his other band (STOLEN BABIES) a lot over the next year, so I am talking to other dudes both for DILLINGER possibilities and just for me to play with on other creative projects. We still may be touring and writing with Gil, though. Kinda in the air. No big drama though or anything."

THE DILLINGER ESCAPE PLAN took part in the 2008 Warped Tour and a cross-country trek with CAVALERA CONSPIRACY.

The band is currently home in the early stages of writing for its follow-up album to "Ire Works". 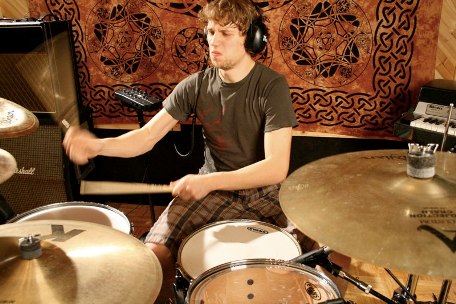