THE DILLINGER ESCAPE PLAN To Release 'Dissociation' Album In October

According to an ad in the latest issue of Revolver magazine, THE DILLINGER ESCAPE PLAN will release its new album, "Dissociation", on October 14 via Party Smasher Inc., the multi-faceted collective founded by the band's guitarist, Ben Weinman, and the label's global partnership with Cooking Vinyl.

Weinman spoke about THE DILLINGER ESCAPE PLAN's upcoming album in an interview with The Void. He said: "It's heavy, man. It's super-heavy, it's definitely dark, but I think it's actually weirder than maybe our last record. There's, like, ideas and riffs that just are so weird. I have to say when I hear it, I'm proud to say nobody sounds like DILLINGER, really. We may be the worst band in the world, but when I listen to it, I really don't think anybody would ever write a riff like this. And that's, I guess, what I'm most proud of. And that's what you gotta do, that's what we try to be, you know? A band that stands out."

In preparation for a busy year of new music and worldwide touring, THE DILLINGER ESCAPE PLAN has announced a short run of intimate shows throughout North America.

Starting in Toronto on August 5, the band will be playing at Hard Luck, making their way down the East Coast through Boston, New York, Philadelphia, and Washington D.C. Soon after, they will be continuing the tour towards the West Coast for shows throughout California.

THE DILLINGER ESCAPE PLAN's fifth full-length album, "One Of Us Is The Killer", sold around 15,000 copies in the United States in its first week of release to debut at position No. 25 on The Billboard 200 chart. The CD was released on May 14, 2013 through Party Smasher Inc., in partnership with Sumerian Records in North America. 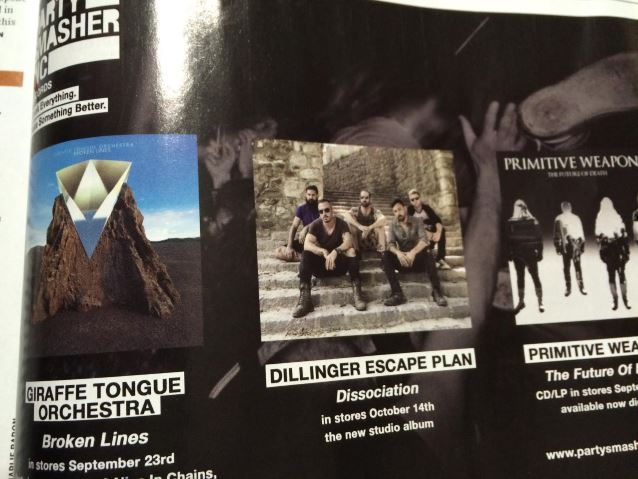 Posted by The Dillinger Escape Plan on Friday, July 29, 2016