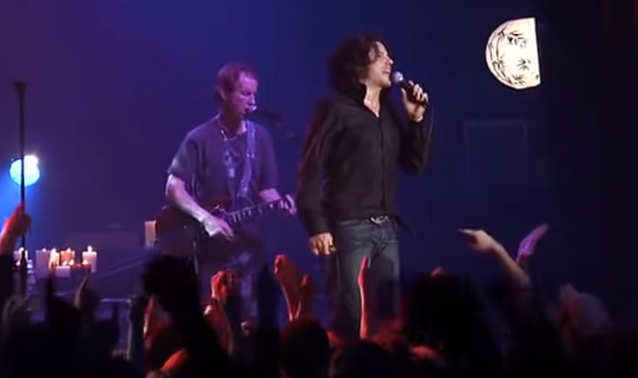 After THE CULT recorded 2001's "Beyond Good And Evil" album, the band broke up and singer Ian Astbury performed with Ray Manzarek and Robby Krieger in THE DOORS OF THE 21ST CENTURY, which was later renamed RIDERS ON THE STORM. Asked in a new interview with Tigman of the WPDH radio station in Poughkeepsie, New York if there is a chance he might work with Astbury again, Krieger said: "I'd like to. I've actually recorded some stuff with him, and we haven't put it out yet, but we're thinking about it.

"[Ian] was really great to work with — except every night, we're at the show, we're ready to go on, and there's Ian ironing his clothes before the show," Robby added. "He was late every show. 'Wait, I have to iron my shirt.'"

In a 2016 interview with Newsweek, Astbury stated about his collaboration with THE DOORS: "Working with them was huge. Ray Manzarek is grounded in classically trained piano and jazz. With them, you see the influence of jazz and space. They weren't really working for a radio format [in THE DOORS]. A lot of artists coming up write the work for the format available. They were free to express themselves on a much broader canvas, and space is very important for that. I think when you create space, you create more dynamics, more awareness."

Two years ago, THE DOORS drummer John Densmore told Daily Camera that balked at Krieger and Manzarek touring with Astbury and THE POLICE drummer Stewart Copeland as THE DOORS OF THE 21ST CENTURY and using late DOORS singer Jim Morrison's image to promote shows.

"That's when," Densmore said, "I made the very difficult decision to sue my bandmates for running off with the name. My premise was, THE DOORS without Jim is ludicrous, just as ludicrous as THE POLICE without Sting, THE [ROLLING] STONES without Mick [Jagger]."

The court eventually sided with Densmore, and Manzarek and Krieger adopted the name D21C.

Densmore's case against his fellow surviving members of THE DOORS — and their $40-million counter-suit against him — was the basis of Densmore's 2013 book "The Doors Unhinged: Jim Morrison's Legacy Goes On Trial".

Last month, Krieger published his memoir, "Set The Night On Fire: Living, Dying, And Playing Guitar With The Doors". It follows two previous tomes from Densmore (1991's "Riders On The Storm" and the aforementioned "The Doors Unhinged") and another by Manzarek (1998's "Light My Fire").

Manzarek died in 2013 of cancer of the bile duct. Densmore later revealed that he and the iconic keyboard player had a chance to reconcile before his death. Since Manzarek's passing, Densmore and Krieger have also reconciled, and they've even performed together.