THE EXALTED PILEDRIVER: New Album Delayed Due To Manufacturing Snafu

"Metal Manifesto", the new album from the Canadian cult metal band THE EXALTED PILEDRIVER (a.k.a. PILEDRIVER),has had its release date pushed back to November 18 from the previously announced October 31 "due to problems encountered in the manufacturing process." Anyone that had pre-ordered the CD format of the album before October 31 will also receive a special CD-R from the band comprising six songs from the album along with seven other exclusive tracks from frontman The Exalted One's vault to make up for the delay. Downloadable versions of the album from online outlets such as iTunes, the Northern Storm site, etc. will not be affected.

The band's first album in 22 years, "Metal Manifesto" was mixed by veteran Neil Kernon (CANNIBAL CORPSE, NEVERMORE) and it follows up the classic cult discography of the band: "Metal Inquisition" (1985) and "Stay Ugly" (1986).

THE EXALTED PILEDRIVER (a.k.a. PILEDRIVER) will hold a release party for its new album "Metal Manifesto", on November 1 at at Disgraceland (965 Bloor St. West of Ossington) in Toronto, Ontario, Canada. Party starts at 9:00 p.m. No cover! 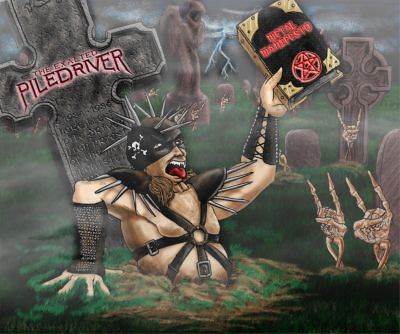