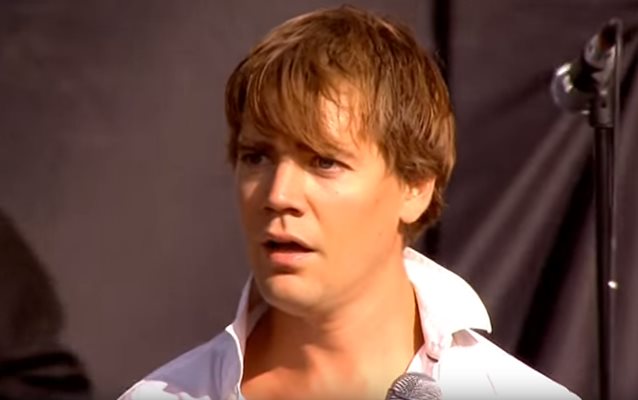 THE HIVES Frontman Puts His Name Forward For AC/DC Job

Howlin' Pelle Almqvist, lead singer of the Swedish garage-rock revivalists THE HIVES, says that he is willing to step in for AC/DC frontman Brian Johnson, who has been advised by doctors to stop touring immediately or risk total hearing loss.

THE HIVES, who are known for performing in ever-changing black and white suits and their spirited live shows, supported AC/DC on an Australian tour late last year.

Now Almqvist, whose stage presence has been compared to that of Mick Jagger's, says that he would jump at the chance of performing with AC/DC.

He writes in a post on THE HIVES' Facebook page: "Very sad to hear Brian Johnson can't do a bunch of AC/DC shows due to health problems. That man is a legend. I would like offer my sincerest well wishes and get wells. And if any help is needed, I put my foot forward and say: HERE I AM!"

He continues: "I have many many years of experience rocking the world's biggest stages and, according to others, I am the greatest frontman in rock, plus judging from the reaction in Australia, your crowd already seems to really like me. Plus, I have already been singing those songs since I was six years old. So, AC/DC‬, please consider my application!"

AC/DC was forced to postpone the last 10 dates of its current North American tour after Johnson got the news from his doctors. The band has said it will reschedule the dates, possibly with a guest vocalist on the mic.

In a recent interview with Faster Louder, Pelle stated about AC/DC: "For all of us, I think that AC/DC was probably the first rock band that we liked. It was the first music that we decided to listen to ourselves, when we could pick our own music. We had the cassettes from a neighbor, the tape of 'For Those About To Rock' in, like, 1982 when we were, like, five or six years old. Since then, they've been one of our favorite bands. In THE HIVES, we keep referencing AC/DC a lot and stuff."

He added: "I think there are bands that have a definite sound, and sound a certain way. AC/DC's one of them. You kind of know what it's going to sound like. And why abandon that? If you come up with something, that's going to ride until it croaks…"