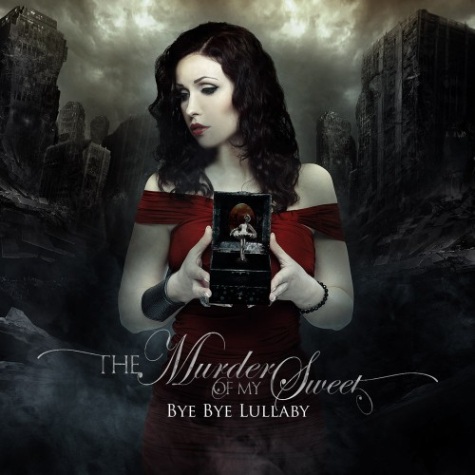 The official lyric video for the song "Black September" from the Swedish female-fronted symphonic rock/metal band THE MURDER OF MY SWEET can be seen below.

THE MURDER OF MY SWEET will release its second album, "Bye Bye Lullaby", on May 25 via AFM Records. The follow-up to 2010's "Divanity" will include 13 brand new tracks. The album's first edition will be available as digipak.

Commented THE MURDER OF MY SWEET singer Angelica Rylin: "'Bye Bye Lullaby' has been a long time coming. We wrote nearly enough songs for two full albums and had to carefully choose these thirteen to truly represent the new, updated THE MURDER OF MY SWEET. This album includes performances from close friends Jesper Strömblad (who you all know from IN FLAMES),Fredrik Åkesson (from OPETH) and Peter Wichers (from SOILWORK),so it's a really brave record. The major difference for me is the variation in the songs; we've taken them down a darker path, as well as on a more commercial path. It's unorthodox, maybe, but since there are so many female-fronted bands out there, we felt that this combination had never been tried before, and would be breaking new ground, which is way more fun."

Added THE MURDER OF MY SWEET composer and drummer Daniel Flores: "Who doesn't like huge variety and impact created with sound? Small fragments of sonic whispering, say mixed with soulful performances? With this new lineup, my imagination had no limits and you will surely be hearing an even bigger cinematic soundscape than you all grew to love on 'Divanity'!"

THE MURDER OF MY SWEET formed in early 2007 when Flores met Rylin. "There was a rumor that Angelica was the finest vocalist in Stockholm and I wanted to see if that was true," said Daniel. "To my amazement, she was!" Daniel had already hooked up with Daniel Palmqvist on guitar, Johan Niemann on bass and Andreas Lindahl on keyboards, so the next step was to start writing songs. "Angelica's voice needed another sort of songs than what we had on the table," continued Daniel. "So we wrote more than 25 songs with 12 of them that [ended] up being on the [first] album."