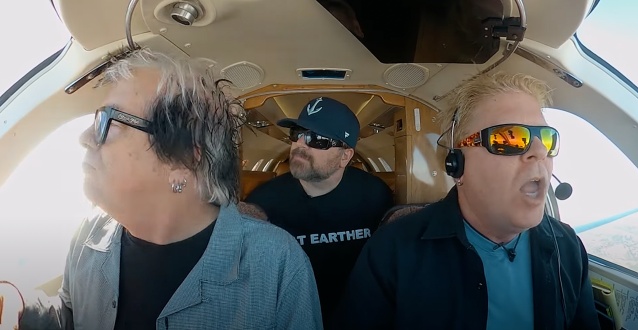 THE OFFSPRING has dropped another episode of "Cockpit Karaoke", a video series featuring frontman Bryan "Dexter" Holland and guitarist Kevin "Noodles" Wasserman singing along to some of the band's biggest hits from inside a private jet that's being flown by Holland, who is a licensed pilot. This time, Dexter and Noodles have opted to tackle "Let The Bad Times Roll", the title track of THE OFFSPRING's latest album.

When "Cockpit Karaoke" was first launched last July — featuring the duo singing "Come Out And Play", with the "Keep 'Em Separated Guy" along for the ride — Holland told SPIN: "We know everyone's heard of 'Carpool Karaoke', but 'Cockpit Karaoke'??? No one's done that!! Since I'm a pilot, we thought it would be great if Noodles and I had some fun and got to sing along to some of our many hits."

"Let The Bad Times Roll" arrived in April 2021 via Concord Records. The follow-up to 2012's "Days Go By" was once again produced by Bob Rock, who also worked on the band's last two LPs.

Last August, Parada announced that was being dropped from THE OFFSPRING's touring lineup after refusing the COVID-19 vaccine for medical reasons. At most of the band's recent shows, he was replaced by Josh Freese, a top L.A. session musician who has played with DEVO, THE VANDALS, NINE INCH NAILS, A PERFECT CIRCLE and GUNS N' ROSES. Freese previously played with THE OFFSPRING on a number of occasions, including during the recording sessions for the "Splinter" (2003),"Rise And Fall, Rage And Grace" (2008) and "Days Go By" (2012) albums.