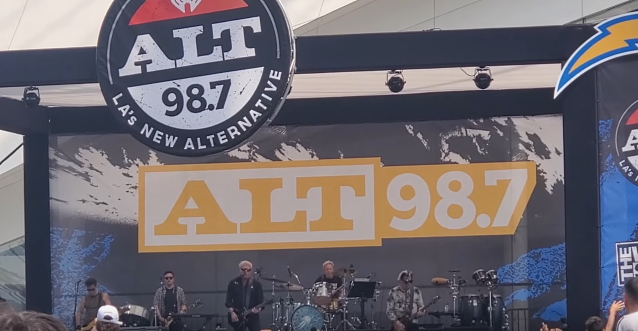 THE OFFSPRING played its first show since the departure of drummer Pete Parada on Sunday, August 8 as part of iHeartMedia Los Angeles's ALT 98.7 FM and the Los Angeles Chargers FanFest in the American Airlines Plaza, just outside SoFi Stadium in Inglewood, California. The concert also marked THE OFFSPRING's first live appearance since March 15, 2020.

Sitting behind the drum kit for THE OFFSPRING in Inglewood was Josh Freese, a top L.A. session musician who has played with DEVO, THE VANDALS, NINE INCH NAILS, A PERFECT CIRCLE and GUNS N' ROSES. Freese previously played with THE OFFSPRING on a number of occasions, including during the recording sessions for the "Splinter" (2003), "Rise And Fall, Rage And Grace" (2008) and "Days Go By" (2012) albums.

Freese played a show with THE VANDALS Saturday night and managed to make it back to L.A. in time for THE OFFSPRING gig by being flown there by the latter band's singer, Bryan "Dexter" Holland, who has a pilot's licence and owns a private jet.

On Saturday, Freese shared an Instagram photo of him with Holland in front of the plane, and he included the following message: "'Hey Josh, can you play on Sunday w/THE OFFSPRING in LA?' 'Yeah sure Dexter but I'm playing Saturday in Denver w/THE VANDALS. Might be cutting it close.' 'We'll how about I fly you to your gig on Saturday and back the same night?' 'You're on!'"

On August 2, Parada announced that was being dropped from THE OFFSPRING's upcoming tour after refusing the COVID-19 vaccine for medical reasons.

Pete said a doctor had advised him not to get the shot because he has a rare autoimmune disorder. The musician said he first experienced Guillain-Barré syndrome, where a person's immune system damages their nerves, in childhood and the effects had got "progressively worse over my lifetime". He also revealed that he contracted COVID-19 over a year ago and only had mild symptoms, "so I am confident I'd be able to handle it again", he wrote.

Parada wrote on social media that he's "unable to comply with what is increasingly becoming an industry mandate". As a result, "it has recently been decided that I am unsafe to be around, in the studio and on tour", he said.

Parada added that he had "no negative feelings towards my band". He wrote: "They're doing what they believe is best for them, while I am doing the same."

It is not clear if Parada, who joined the group in 2007, has now left THE OFFSPRING permanently.