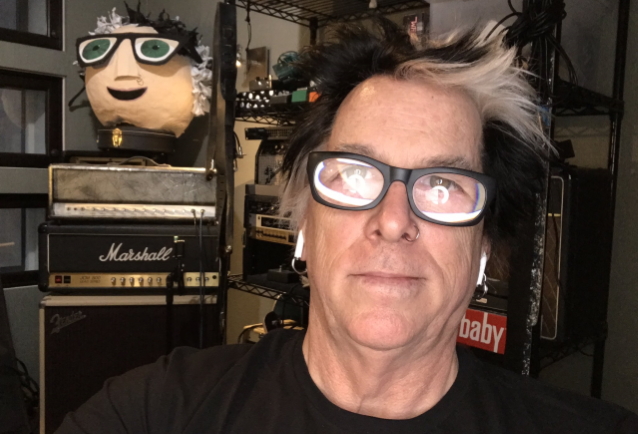 THE OFFSPRING's NOODLES Picks JOEY RAMONE As His 'Rock God'

THE OFFSPRING guitarist Kevin "Noodles" Wasserman was the featured guest on BBC's "The Rock Show With Johnnie Walker" during the "Rock God" segment. Noodles picked RAMONES legend Joey Ramone and stated about his choice: "The reason why I chose Joey Ramone — well, there's many reasons. First and foremost is he is just an iconic figure in not just punk rock anymore but in the rock and roll scene in general. He was tall, he would wear ripped jeans and a leather jacket and tennis shoes. He just stood there and looked like a god with this crazy mane of black hair.

"What a lot of people don't know is that Joey Ramone really struggled a lot with both physical and emotional and mental maladies," he continued. "He had almost crippling OCD [obsessive-compulsive disorder] that drove his bandmates crazy when he would have to count every fence post before he got in a van, and if he thought he missed one, he'd have to go back and start all over. And sometimes it took a long time for him to even get in a van before they could go to a gig. But he did. He still overcame all those struggles and became one of the most iconic voices in rock and roll and punk rock. He wrote songs that are so relatable and just get stuck in your head. Every one is something you just wanna sing along to.

"I think even now more than ever, the RAMONES are more appreciated, more listened to and you certainly see more RAMONES t-shirts than ever before. So that is why Joey Ramone is, and always will be, my rock god."

Earlier in the month, it was reported that Netflix and STXfilms have partnered to develop and produce "I Slept With Joey Ramone", a biopic chronicling the life of the king of punk.

Pete Davidson ("Saturday Night Live") will portray Ramone in the film, which will be made with the cooperation and support of Joey Ramone's estate and with the assistance of Rosegarten Films. The film is based on the memoir of the same name, written by his brother Mickey Leigh. Leigh will serve as an executive producer.

"I Slept With Joey Ramone" will be directed by Jason Orley, who previously worked with Davidson on the 2019 feature film "Big Time Adolescence" and the comedian's stand-up special "Pete Davidson: Alive From New York".

Ramone passed away in April 2001 after a seven-year battle with lymphoma.