Swedish rockers THE POODLES have posted the following "2008 recap" on their official web site:

"Another year has come to an end, another great year for THE POODLES. A lot of things, both good and bad, have happened and even greater things are soon to come.

"So what did we really do during 2008? Well, we started out in great style by doing our first performance in the Swedish game show 'Bingolotto', where we, for the first, and only time so far, performed the song 'We Are One'.

"In early February we joined forces with our good friend and fellow artist E-TYPE to, once again, compete in the Swedish edition of the Eurovision Song Contest. This time with the song 'Line Of Fire', which was written by E-Type and Jakob [Samuel; THE POODLES singer, also ex-THE RING, TALISMAN, JEKYLL & HYDE]. So this happy bunch went down to Gothenburg and then on to the northern city of Kiruna to defend our colors.

"When the Eurovision was all taken care of, we set our sails and headed out to meet the fans in Europe. During March and April we played a number of fantastic shows in Germany, Holland, Spain, Italy and Switzerland. With us on the journey, as special guest, was the band JADED HEART. Together we rolled across Europe, had a lot of laughs (smiskfest!) and were blown away by many great crowds along the way.

"When we came back home after this very successful trek, we were all shocked by the sad news that our great friend and ally, guitar player Pontus Norgren, had decided to leave the band to seek his fortune elsewhere (HAMMERFALL). A bit taken aback, of course, but still determined to keep the fire burning we started the search for a suitable replacement. Not an easy task but in the end we found what we had been looking for, after a period of auditions and tryouts, we were very happy to welcome Henrik Bergqvist (ex-TIAMAT) into our family. After some intense rehearsing, Henrik was ready and very eager to meet the fans. The premiere of our summer tour and also Henrik's first live appearance with the band was on June 8th at the Sweden Rock Festival. A very intense period followed with a lot of festival shows mostly in Sweden but also with a few stops in Germany. After the nerve-racking experience at the Sweden Rock Festival, Henrik blended into the band in such a great way it now feels like he’s always been a part of it.

"A few highlights of the summer included a performance at the classic TV show 'Allsång på Skansen' and at 'Sommarkrysset'. We were also given the great honor to record and perform the official Swedish Olympic theme song of the 2008 Olympic games, 'Raise The Banner'. This was, of course, in focus during the summer and the song reached the No. 1 position in the Swedish singles chart in August.

"The fall has been a very productive period for the band even though the public appearances have been few. Enough music to fill three albums has been written and out of all this music we have selected 14 songs that will appear on our next masterpiece.

"In late November we entered the studio and the recordings will continue, probably until the end of January. We are aiming for a release somewhere in April-May and once that CD hits the stores we are most certainly going to hit the road again."

THE POODLES has set "Clash Of The Elements" as the title of its third album. The group, which recently parted ways with its record label Lionheart International after a three-year partnership, is once again working with producer Mats Valentin. Songtitles set to appear on the CD include "One Out Of Ten", "Caroline", "Like There's No Tomorrow" and "7 Days & 7 Nights". 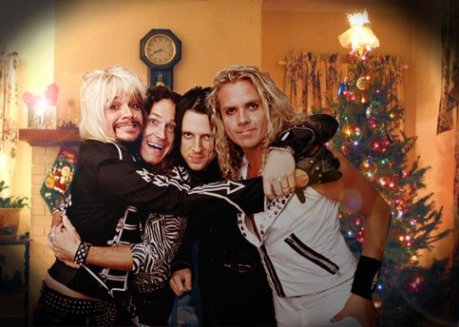 THE POODLES's "Seven Seas" video (featuring a guest appearance by Swedish actor Peter Stormare) can be viewed below.