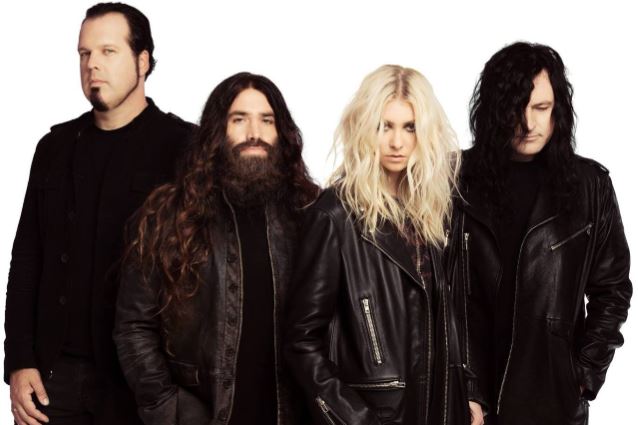 THE PRETTY RECKLESS has been forced to cancel tonight's (Tuesday, November 15) sold-out concert at Paradise Rock Club in Boston, Massachusetts due to singer Taylor Momsen being ill.

The band says in a statement: "Boston, we hate to do this, but our singer is very sick and we cannot play the show tonight. As a band, there is nothing worse than letting our fans down… We are working to figure out a date to reschedule and we will make it up to you soon, we promise!"

THE PRETTY RECKLESS recently broke a record set by 3 DOORS DOWN and has seen its first four mainstream singles hit No. 1 on Billboard's rock chart. The band's new song, "Take Me Down", topped the chart, following in the footsteps of "Heaven Knows", "Messed Up World" and "Follow Me Down" from 2014's "Going To Hell" album. That broke the group's tie with 3 DOORS DOWN and put them in a position to tie or break the next record, five No. 1 singles, which is owned for now by Canada's THREE DAYS GRACE.

THE PRETTY RECKLESS also now have the most No. 1 singles by a female-fronted rock act.

"Take Me Down" is from the band's third studio set, "Who You Selling For", which arrived on October 21.

Momsen told The Pulse Of Radio that the band's goals for making the new disc were simple. "Our goal with this record was to try not to try, to have everything be very relaxed, everything very organic," she said. "So everything was done very organically and I think in the studio we very much kept with that ethic. Not that that's a new ethic for us, but we just went further down that path of 'try not to try' and really try to capture the performance and, you know, for lack of a better word, that magic moment."

Momsen said in a recent interview that the new disc was "very eclectic" and "very diverse," adding, "It takes lots of turns in many different directions." Alternative Nation labeled it their "most daring, progressive album yet."

The band is supporting the new record with a North American tour.