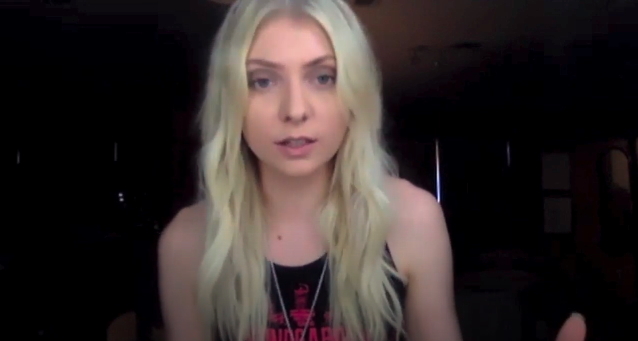 THE PRETTY RECKLESS frontwoman Taylor Momsen spoke with Terrie Carr of the Morristown, New Jersey radio station 105.5 WDHA about the band's latest single, "Death By Rock And Roll", taken from the forthcoming album of the same name.

"It's always crazy to release music at any time, 'cause you never know how it's gonna be received, but especially to release music during the most unprecedented time in my life is terrifying," Momsen said, referring to the coronavirus which is sweeping the globe. "And the reception has been so overwhelmingly positive and amazing that I am so thankful."

During the chat, Momsen spoke about how the making of "Death By Rock And Roll" was affected by the passing of THE PRETTY RECKLESS's longtime producer Kato Khandwala.

"I'm not letting his memory die," she said. "And that's kind of the point of 'Death By Rock And Roll'. We bonded over the fact — all of us: the band, Kato and me — we all live our life with this ethic of rock and roll and the sense that rock and roll is freedom. It's a mentality, it's a lifestyle, it's an energy, it's obviously the music, it's infused into you as part of your soul. And if you live by that ethic — if you live life your own way, go out your own way, don't let anyone tell you different… Life by rock and roll, death by rock and roll, rock and roll till I die — and that's the message of the first song."

Khandwala died in April 2018 from injuries sustained in a motorcycle accident.

Momsen recently confirmed in a separate interview with Detroit radio station WRIF that RAGE AGAINST THE MACHINE guitarist Tom Morello guests on "Death By Rock And Roll". Morello appears on a track called "And So It Went".

"Death By Rock And Roll", the fourth studio album from THE PRETTY RECKLESS, will arrive in late 2020 or early 2021. It will follow up 2016's "Who You Selling For", which featured the rock radio hits "Oh My God", "Back To The River" and "Take Me Down".