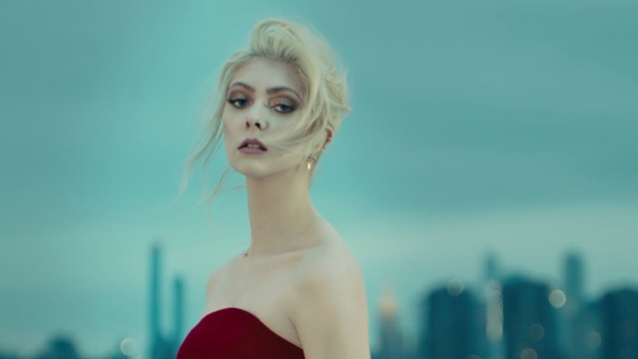 THE PRETTY RECKLESS frontwoman Taylor Momsen says that she is optimistic that, in a post-pandemic future, concerts will be "bigger and better than ever."

Momsen, who is promoting THE PRETTY RECKLESS's upcoming album, "Death By Rock And Roll", tells NME that she has a bright perspective of where the touring industry will be once the coronavirus crisis has subsided.

"Yeah, I think I'm always hopeful," she says (see video below). "I've got a little hippy in me, so I'm maybe at times naïve, but I think that peace, love and understanding and compassion are things that, as a society, we need to focus on. And I am very hopeful for change and that the world will start to right itself and we'll get back on track and not be back to where we were, but be in a better state of living than we were before the pandemic. That's my hope — that everyone can really just start to come together and move forward in the most positive way possible. And I think that that's still gonna require a lot of patience. That's what 2020 and the beginning of 2021 has certainly taught me — it's taught me to be patient."

She continues: "I don't wanna get too deep into politics, but on the shallow side of things, we all miss concerts. I miss playing live. It's been way too long. It's very, very bizarre putting out new music and not being able to play it live. It's crazy. But at the same time, concerts aren't gone forever. We just have to do our part, be patient and eventually they'll come back. And my joke is when they do, it's like tantric sex — we've been depriving them for so long, when they come back, they're just gonna explode; it's gonna be bigger and better than ever. So, if everyone stays patient, and if collectively work on healing, I think that we'll get to a much better place than we started off at."

The LP is THE PRETTY RECKLESS's first to be made without longtime producer Kato Khandwala, who died in April 2018 from injuries sustained in a motorcycle accident.

The latest single from "Death By Rock And Roll" is "And So It Went", which features guitarist Tom Morello (RAGE AGAINST THE MACHINE). Other guests on the album include Kim Thayil and Matt Cameron from SOUNDGARDEN. The song with Cameron and Thayil, called "Only Love Can Save Me Now", was recorded at Seattle's legendary London Bridge Studios, where seminal LPs like PEARL JAM's "Ten" and SOUNDGARDEN's "Louder Than Love" were laid down.