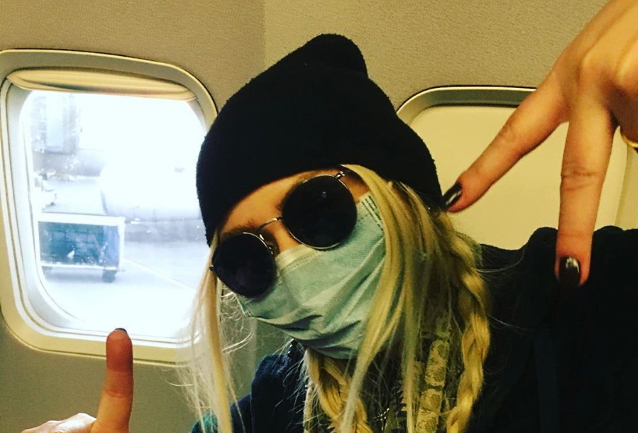 In a new interview with Marci Wiser of the 95.5 KLOS radio station, THE PRETTY RECKLESS frontwoman Taylor Momsen spoke about the prospect of playing live shows in states where concerts are currently allowed amid the coronavirus pandemic. She said (hear audio below): "That makes me nervous. I'm a hypochondriac and a freak about this stuff anyway. I wear masks on airplanes regardless. I think it stems from being a singer and touring and just desperately trying to not get sick on tour. When you're sick on tour, it's awful. There's no time to recover, and you kind of never get better; you just kind of suffer through the rest of that leg. You're never 100 percent again until the tour is over. So my paranoia of the Purell [hand sanitizer] and the masks and everything, it's not too different now that I don't leave the house."

THE PRETTY RECKLESS's fourth album, "Death By Rock And Roll", will be released in early 2021 via Fearless Records in the U.S. and Century Media Records in the rest of the world. The title track was made available in May.

Momsen confirmed in an interview that RAGE AGAINST THE MACHINE guitarist Tom Morello guests on "Death By Rock And Roll". Morello appears on a track called "And So It Went".

Momsen recently said that she was "devastated" by the death of SOUNDGARDEN singer Chris Cornell. THE PRETTY RECKLESS opened for SOUNDGARDEN in Detroit on May 17, 2017, a couple of hours before Cornell apparently committed suicide by hanging. Less than a year later, in April 2018, THE PRETTY RECKLESS's producer Kato Khandwala died from injuries sustained in a motorcycle accident.

#LOSANGELES Take a break at 1pm PT and tune in to 95.5fm @klos955 to hear me and @marciwiser talk #ROCK !!! This is a pic from last time I went to LA about a year ago...always wearing a mask! #deathbyrockandroll #LA