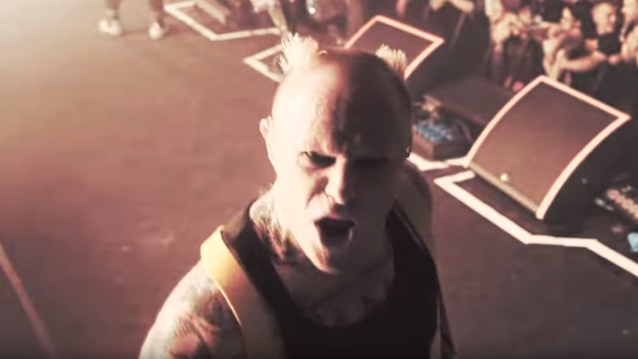 THE PRODIGY singer Keith Flint died as a result of hanging, it has been revealed. He was found dead on March 4 at his home in Essex, a county in the southeast of England, northeast of London.

A postmortem was carried out on Flint's body last Thursday. The coroner's officer, Lynsey Chaffe, said during a two-minute hearing on Monday that there were no suspicious circumstances surrounding his death. "Police attended, all protocols were followed and his death was confirmed as not suspicious," she said. Chaffe added that Flint's death remains under investigation while toxicology reports are awaited.

THE PRODIGY was scheduled to embark on a U.S. tour in May. The 10-date trek was slated to include appearances at several festivals, including Sonic Temple in Ohio and Welcome To Rockville in Florida.

Originally recruited mainly as a dancer for THE PRODIGY, Flint became the voice and face of the group for its 1997 third album, "The Fat Of The Land". The breakout LP produced the hits "Breathe", "Firestarter" and the controversial "Smack My Bitch Up", reaching No. 1on the Billboard 200 in July 1997.

Flint's cartoonishly demonic look, punk attitude and frantic dance moves became the visual trademark of THE PRODIGY, one of the first electronic dance music acts to become a mainstream success. But Flint's role in the band was reduced after the release of another controversial track, "Baby's Got A Temper", in which Flint celebrated the "date rape" drug Rohypnol.

The singer/dancer did not appear on "The Fat Of The Land"'s 2004 follow-up "Always Outnumbered, Never Outgunned", which featured guest vocalists in his place. He returned for 2009's "Invaders Must Die", and contributed both vocals and songwriting to 2015's "The Day Is My Enemy" and THE PRODIGY's most recent LP, 2018's "No Tourists".

He previously admitted to a long battle with drink, drugs and depression and said his wife "saved him."