After the band's sold-out December 22, 2008 concert at the Newcastle Academy, THE QUIREBOYS went into Blast studios and recorded the official song for the U.K. soccer team Blyth Spartans who face Premier League's Blackburn Rovers on January 5 in front of the Setanta Sports.

According to What's On NE, releasing a song to celebrate Blyth's class of 2008 was the brainchild of rock writer and editor of the RushOnRock.com web site, Simon Rushworth.

"I used to watch Spartans with my oldest mate Paccers all the time as a kid," he said. "I remember thousands turning out for a cup tie one night against Bromsgrove Rovers but I was only four in 1978 so the Blackburn match is the biggest for me. I knew Paul [Guerin, THE QUIREBOYS guitarist] was a Spartans fanatic so I made a few calls and THE QUIREBOYS were well up for it."

The song is now available for purchase/download at this location.

Spartans' nominated charity, the Make A Wish Foundation, will benefit from any profits from sales. Club secretary Ian Evans said: "We're all very excited about this song. We've never had a song written for us before and I know Paul will deliver the goods. He's good friends from way back with one of our board members, Kevin Scott, and Kevin has every faith in the band." 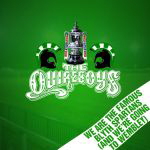