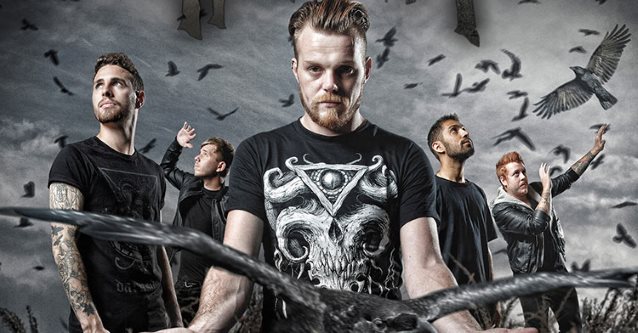 "Angel In Disgrace", the new video from THE RAVEN AGE, the U.K.-based band led by IRON MAIDEN bassist Steve Harris's son George Harris, can be seen below. The closing cut on THE RAVEN AGE's self-titled EP, it has already been streamed more than 150,000 times, proving to be their most successful track yet.

Said George: "This track has gained a lot of attention across the world and it's nice to be able to illustrate the story behind the song."

THE RAVEN AGE is a melodic metal band from London, United Kingdom consisting of five individuals who very quickly became friends through sharing a love for heavy music and a passion for songwriting.

In 2009, guitarists Dan Wright and George Harris began establishing their vision of a band that combines contemporary heavy music with powerful melodic vocals to create an epic and unique sound.

After writing their first album, they began searching for likeminded musicians to join the band and make their vision a reality.

Taking on bass player Matt Cox in 2012, with vocalist Michael Burrough and drummer Jai Patel joining in early 2013, the lineup was complete and ready to take their music to the stage.

THE RAVEN AGE is currently touring South America with IRON MAIDEN and ANTHRAX as part of "The Book Of Souls" world tour, which will continue on to North America, Japan, China, New Zealand, Australia, South Africa and finish with an extensive run in Europe. The band will also be appear at some of the most established rock and metal festivals this summer, including the U.K.'s Download.

THE RAVEN AGE has many more exciting announcements planned for the remainder of this year, including the release of the band's debut full-length album.