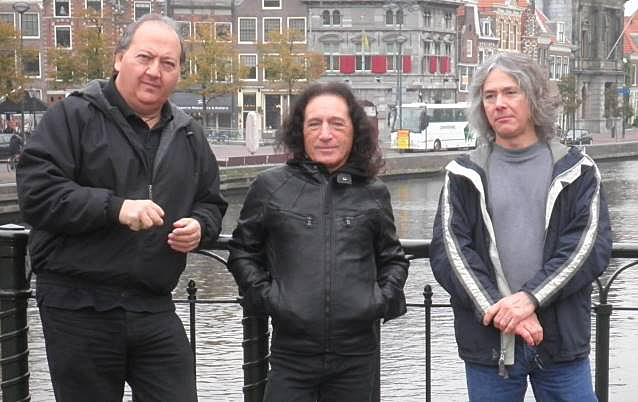 THE RODS To Release 'Great Big Fake Ones' Single, Video

According to Ithaca.com, Cortland, New York-based metal veterans THE RODS will independently release a new single/video, "Great Big Fake Ones", via iTunes and CD Baby. The track was laid down in Cortland and Carbondale using home studios for the most part. The clip will be filmed with Syracuse-based director Dave Porter.

"We played [the song] for a couple of people and the reactions have been very positive," bassist Garry Bordonaro said. "It's something that will certainly make you smile."

Regarding the recording process for "Great Big Fake Ones", Bordonaro said: "Recording sessions take time and money, neither of which we have. And we don't all live in the same place, so getting together is difficult."

He continued: "We just picked away at it. We're old studio dogs. We did the 'In The Raw' (Shrapnel, 1983) album in a few days and actually recorded about two albums' worth of material. We just blew through it. That was always our hallmark — fast, dirty and cheap."

David "Rock" Feinstein of THE RODS is the cousin of Ronnie James Dio (both played together in ELF) and THE RODS drummer Carl Canedy is an acclaimed metal producer who has worked on classic early releases by MEGADETH, ANTHRAX and OVERKILL.

THE RODS' seventh release overall (and sixth release overall for Niji Entertainment Group, a label that was created by Ronnie and Wendy Dio) was titled "Vengeance" and was made available in May 2011. The album arrived on the heels of Feinstein's solo album, "Bitten By The Beast".

The first single off "Vengeance" was "The Code", which featured vocals from none other than Ronnie James Dio (one of the very last songs that Ronnie ever recorded, before his untimely death in May of 2010).