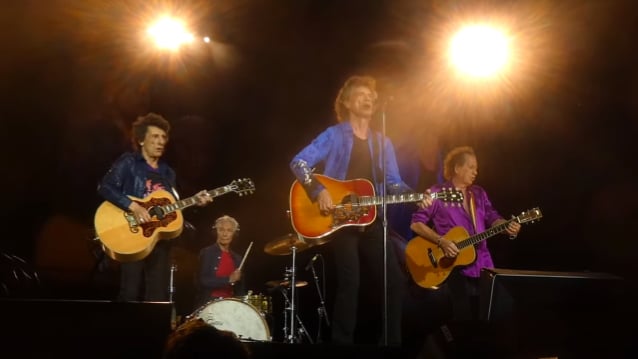 THE ROLLING STONES have released a brand-new song called "Living In A Ghost Town". The track is the group's first original composition since "Doom and Gloom" and "One More Shot" were made available on THE ROLLING STONES' 2012 compilation album "GRRR!"

Singer Mick Jagger said the band was "recording some new material before the lockdown and there was one song we thought would resonate through the times that we're living in right now. We've worked on it in isolation. And here it is."

Guitarist Keith Richards said: "We cut this track well over a year ago in L.A. for a new album, an ongoing thing, and then shit hit the fan. Mick and I decided this one really needed to go to work right now and so here you have it."

In a new interview with Zane Lowe of Apple Music, Jagger said the song "was written about being in a place which was full of life but is now bereft of life, so to speak… I was just jamming on the guitar and wrote it really quickly in like 10 minutes… Keith Richards and I both had the idea that we should release it. But I said, 'Well I've got to rewrite it.' Some of it is not going to work and some of it was a bit weird and a bit too dark. So I slightly rewrote it. I didn't have to rewrite very much, to be honest. It's very much how I originally did it."

Jagger also addressed the postponement of THE ROLLING STONES' 2020 stadium tour due to the COVID-19 pandemic that is sweeping the globe.

"We don't know when the next tour outside's going to be," Jagger told Lowe. "You would imagine that playing outside would be more healthy than playing inside, one would imagine, but you don't know. And people are saying, 'Well are you going to be playing in a stadium that’s 40,000 people? You're going to have 20,000 people in there,' for instance. But this is all in the realm of conjecture."