A very small number of wristbands will be available today at Amoeba Music in Hollywood (cash only). Lining up starts at 1:00 p.m. (no earlier). First come first served. One wristband per person.

Do not come to the Troubadour if you do not have a wristband. All cellphones will be checked and locked. No large bags permitted.

Next month, THE SMASHING PUMPKINS will embark on the "Shiny And Oh So Bright" North American arena tour with support from METRIC. Produced by Live Nation, the tour is the band's first in nearly 20 years to feature founding members frontman Billy Corgan, guitarist James Iha and drummer Jimmy Chamberlin. Longtime SMASHING PUMPKINS guitarist Jeff Schroeder, bassist Jack Bates, and keyboardist Katie Cole will also take part, as the band moves to a three-guitar lineup to better emulate the signature tones and textures of their albums.

Earlier this month, THE SMASHING PUMPKINS dropped "Solara", the first recording in over 18 years to feature founding Corgan, Iha and Chamberlin. Recorded in Malibu, California at Shangri La Studios with producer Rick Rubin and guitarist Jeff Schroeder, "Solara" is available now to stream and download on all digital music platforms via Martha's Music under license to Napalm Records.

Corgan, Iha and Chamberlin last played together on 2000's "Untitled". "Untitled" was Iha's last PUMPKINS recording prior to "Solara", while Chamberlin's was 2009's "FOL".

Original SMASHING PUMPKINS bassist D'Arcy Wretzky is is not taking part at all in the band's reunion after recently claiming that Corgan offered to have her come out and do sporadic appearances on the upcoming reunion tour.

The "Shiny And Oh So Bright" tour, which will reportedly focus on the band's first five albums, kicks off on July 12 in Glendale, Arizona.

Formed in Chicago, Illinois in 1988, THE SMASHING PUMPKINS released their heralded debut album, "Gish", in 1991 and found mainstream success with 1993's four-times-platinum "Siamese Dream" and 1995's 10-times-platinum "Mellon Collie And The Infinite Sadness". 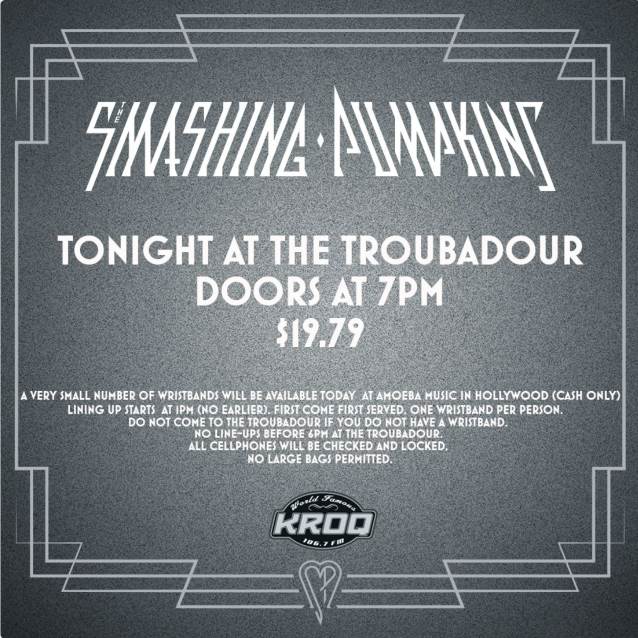