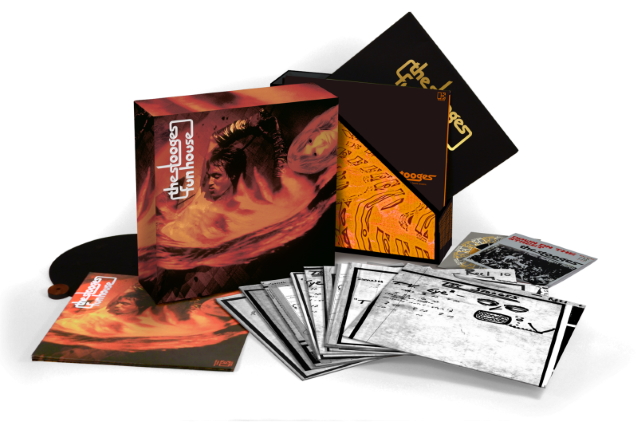 Rhino has set a July 31 release date for THE STOOGES' 50th-anniversary "Fun House" box set. Featured are all seven tracks from the original album, newly remastered on 2-LP 45 RPM (for highest audio quality),the vinyl debut of "The Complete Funhouse Sessions" and "Have Some Fun: Live At Ungano's", a recording of THE STOOGES performing live in New York City in August 1970, just as "Fun House" was released. Rounding out the music in this deluxe set are two mixes of the single "Down On The Street"/"I Feel Alright". The first is the "Mono Single Edit" released in France, and the other is the unique "Single Mix" that was unreleased until the original 1999 boxed set. Each one is pressed on seven-inch vinyl and presented in a sleeve with reproduction artwork.

A trailer for the deluxe edition of the 50th-anniversary "Fun House" box set is available below.

Beyond the music, the collection also includes a 28-page booklet with rare photos and extensive liner notes, featuring an essay by Henry Rollins and testimonials penned by an extensive list of rock and roll luminaries, including Flea, Joan Jett, Shirley Manson, Duff McKagan, Thurston Moore, Tom Morello, Karen O, Mike Watt and Steven Van Zandt, among others, plus posters, prints, a slipmat, and a 45 adapter.

Moore said: "From the first hit to the last breath, where the design and the aesthetic are so in focus to both reality and the magic that is the essence of true creative vision, 'Fun House' was the blueprint, the template for what I wanted in rock and roll: direct action rhythm where the bass and drums are informed by urban blues swing, fire-in-the-hole guitar shred that is way too cool to show off, and a singer who is in the fucking moment alive with all the love, rage, guts and glory that his sonic prayers could beseech. Speaking for anyone who was saved by punk-noise-art-hardcore-psyche-folk-no wave foreverness — 'Fun House' is where it begins, where we all come out to play."

Flea added: "'Fun House' is the raw and beautiful truth. It is beyond categorization, and I'll be listening to it for the rest of my life."

McKagan stated: "'Down On The Street' taught me everything I needed to know about groove to this day. 'T.V. Eye' taught me all I needed to know about how to play a guitar. 'Dirt' killed me… the slow drudge and discord. 'Loose', '1970', 'Fun House' and 'L.A. Blues' remain pure motherfucking classics on how rock 'n' roll should be done. Period. This is THE record to have, if you know what the fuck is up."