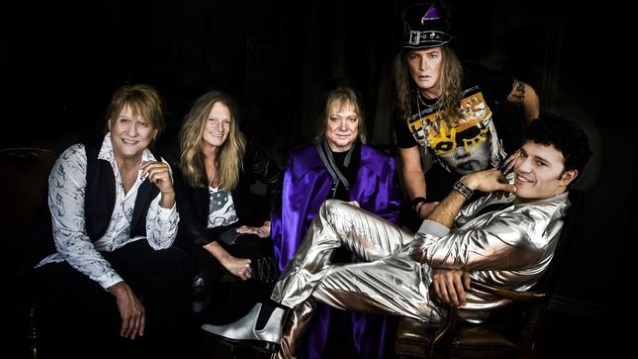 Legendary rock band THE SWEET has announced the first leg of its 50th-anniversary world tour. This new rock production is a must-see show for 2018.

SWEET will kick off its 2018 tour on March 30 in Michigan and will return to New York City for the first time in 39 years with an April 26 Gramercy Theatre concert. Their 1979 performance was at the now-defunct Palladium.

One of the most influential British rock bands of all times, THE SWEET rose to worldwide fame in the 1970s as the premier glam rock act. The band achieved a rocket ride to success with numerous hits, including "Ballroom Blitz", "Fox On The Run", "Love Is Like Oxygen", "Little Willy", "Action", "Teenage Rampage", "ACDC", "Blockbuster" and "Hell Raiser", to name just a few. Around the world the group has sold over 55 million records.

SWEET is experiencing a resurgence with the use of two of its biggest hits featured in two blockbuster movies. "Fox On The Run" was featured on both the soundtrack and trailers of the third-top-grossing movie of 2017, "Guardians Of The Galaxy 2". This exposure catapulted the song and group to No. 1 on the iTunes chart for three weeks last spring. SWEET's hit "Ballroom Blitz" was in the international trailer for "Suicide Squad" and was downloaded 13 million times.

THE SWEET reformed in 2008 and, during the ten years of this lineup, has played hundreds of shows, including a South American tour with JOURNEY as well as BOSTON, Sammy Hagar, Joan Jett, Peter Frampton and Steve Winwood, to name just a few.

Find more on The sweet