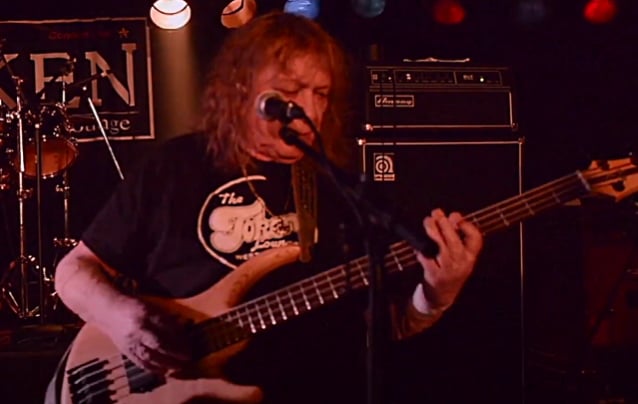 THE SWEET's founding bassist Steve Priest has died at the age of 72. His passing was confirmed by Priest's bandmate Andy Scott.

In a statement on the band's Facebook page, Scott wrote: "Then there was one! I am in pieces right now. Steve Priest has passed away. His wife Maureen and I have kept in contact and though his health was failing I never envisaged this moment. Never. My thoughts are with his family.

"He was the best bass player I ever played with. The noise we made as a band was so powerful. From that moment in the summer of 1970 when set off on our Musical Odyssey the world opened up and the rollercoaster ride started! He eventually followed his heart and moved to the USA. First New York then LA.

"Rest in Peace brother. All my love."

By the early 1970s, THE SWEET was arguably the hottest ticket in town with a string of Top 10 records in Europe including "Blockbuster", "Hellraiser", "Ballroom Blitz", "Teenage Rampage" and "The Sixteens".

In 1975, the USA had discovered the band, with "Fox On The Run" hitting the No. 3 spot in the Billboard 100. Another self-penned hit "Action" followed in 1976, firmly establishing THE SWEET in the U.S. charts.

On the face of it, THE SWEET was primarily a singles band. However, with the landmark albums including "Desolation Boulevard" (1975) and "Give Us A Wink" (1976),the band displayed a much harder-rocking sound. The album "Level Headed", released in 1978, brought with it another award-winning million-selling worldwide hit with "Love Is Like Oxygen" written by Scott.

In 2008, Priest assembled his own version of THE SWEET in Los Angeles. He reportedly owned the name and logo in Canada and the U.S., while Scott owns THE SWEET name and the logo in the U.K. and Australia.

"If we go anywhere that he owns his version of THE SWEET, I have to call it STEVE PRIEST'S SWEET," Priest told the Phoenix New Times in a 2018 interview. "Or SP SWEET."

Then there was one!

I am in pieces right now. Steve Priest has passed away. His wife Maureen and I have kept in...