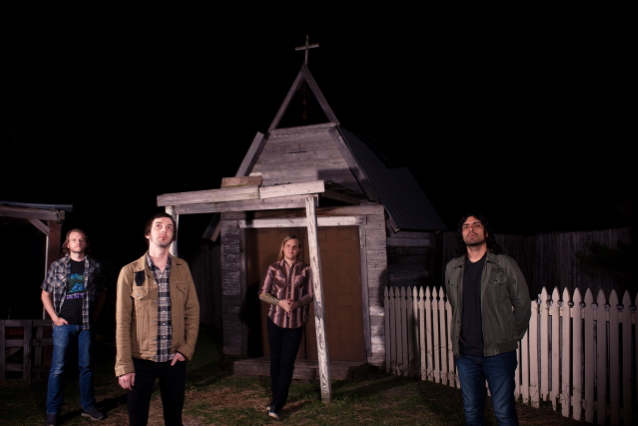 THE SWORD Calls It Quits

Texan heavy rockers THE SWORD have called it quits.

The announcement of the band's breakup was made by frontman John D. Cronise. He wrote in a social media post earlier today: "Hello friends, I find it my duty to inform you that, after much contemplation, I have reached the difficult conclusion that it's time to bring THE SWORD's long and storied career to a close.

"When I started the band back in 2004, I could've only hoped for the successes we've enjoyed, and I consider myself extremely lucky to have been able to do it for a living for almost two decades. In that time
everything I ever wanted to say and do with THE SWORD creatively has been said and done, and so the time has come for me to move on to other endeavors.

"Thanks to everyone who's ever come to a show, bought our albums and merch, and supported us over the years. Thanks to everyone who's teched, tour managed, done sound, or sold merch for us. Thanks to all the bands who've taken us on tour and to all the bands we've taken on tour. Thanks to the promotors and venues who booked us and let us play. Thanks to the producers and recording engineers who worked on our albums and to the labels that released them. Thanks to Josh our booking agent and Mark our business manager, whom we are glad to count as friends. And most of all thanks to my bandmates, Kyle, Bryan, Jimmy, and Trivett, for having faith in me and allowing me to realize my vision. You dudes are true legends.

"It's been a helluva journey. Now it's time for the next chapter..."

In 2020, THE SWORD launched the "Conquest Of Quarantine" lockdown sessions. The lockdown sessions marked THE SWORD's first live performances together since the band went on hiatus in 2018, as they remotely reunited to perform songs like "Winter's Wolves", "Working Man" and put their own inimitable spin on the T. REX classic "Children Of The Revolution".

THE SWORD's compilations "Chronology: 2006-2018" and "Conquest Of Kingdoms", both released in 2020, each showcased the technically dazzling, riff-heavy and far-reaching metal that the band has been known for since forming 17 years ago.

"Conquest Of Kingdoms", an explosive three-disc vinyl collection of rarities and oddities, offered 30 tracks (16 previously unreleased) and was housed in a triple-gatefold package, including B-sides, oddities and live recordings of fan favorites like "Freya", "Iron Swan" and "Fire Lances Of The Ancient Hyperzephyrians", as well as cover versions of "Immigrant Song" (LED ZEPPELIN),"Nasty Dogs And Funky Kings" (ZZ TOP),"She" (KISS),"Forever My Queen" (PENTAGRAM) and more. A truncated digital version is also available.