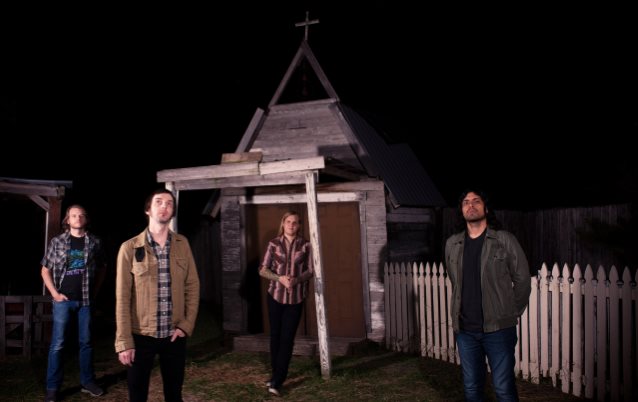 THE SWORD To Release 'High Country' Album In August

Austin, Texas metal luminaries THE SWORD will release their new album, "High Country", on August 21 via Razor & Tie. Recorded in Austin, the CD was produced by Adrian Quesada and mixed by J. Robbins.

"High Country" features 15 new compositions and will be released simultaneously in CD and double vinyl formats.

In conjunction with the release of "High Country", THE SWORD will embark on a 25-show European tour. The trek begins on release day, August 21, at the Pstereo Festival in Trondheim, Norway and ends in Bristol, U.K. on September 19. The band will be touring throughout the remainder of 2015 and 2016.

Dates for the first international leg of the "High Country" tour are:

THE SWORD's fourth album, "Apocryphon", sold nearly 17,000 copies in the United States in its first week of release to land at position No. 17 on The Billboard 200 chart. The CD was produced and engineered by J. Robbins (CLUTCH, JAWBOX) at Magpie Cage Studios and features cover art by famed comic book artist J.H. Williams III (Batwoman, Promethea).

Asked by Radio Cannon in a 2014 interview how he feels the metal scene has evolved since THE SWORD started, the band's guitarist, Kyle Shutt, said: "It's funny, because I think when we started people reacted differently to us because the metal scene was dominated by these macho, wrestler-looking types, screaming at you, etc… And bands like that are dying out. It's becoming a lot more rock 'n' roll. And I also notice that heavy metal journalism in the last ten years is so much more positive compared to when we started. It was so negative back then. And you gotta have haters, you know what I'm saying? It's just that there used to besome serious debates about us on message boards where people would try to figure out what we did and have these crazy theories that we were like, this pre-packaged band. It was so hateful for no reason, and nowadays people are so much more accepting. I think music just got so terrible for a while and so many shitty bands got shoved down people's throats by record labels throwing money at record stations and I think people just started looking past the bullshit and are much more open-minded now, with awesome bands like GRAVEYARD and BOMBUS. Or AMERICAN SHARKS, from Austin. Just cool heavy bands getting exposure."