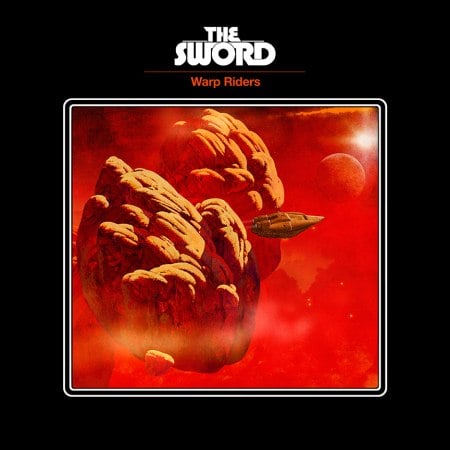 A live EP featuring five songs that were recorded during THE SWORD's July 3, 2010 performance at the iTunes festival at London, England's Roundhouse has been released exclusively via Apple's iTunes Store.

"Tres Brujas", a brand new song from THE SWORD, is now available for purchase via iTunes. The track comes off the band's third full-length album, "Warp Riders", which is scheduled for release on August 24 via Kemado Records.

"Tres Brujas" is the first part of a video trilogy helmed by former THE SWORD collaborators Artificial Army, which will launch in August. The second and third chapters of the saga will be for "Lawless Lands" and "Night City".

With a narrative arc that the band describes as "a psychedelic space opera that explores the temporal themes of death and rebirth," it's only fitting that the record's cover art is equally mind melting. Paying homage to authors that inspired the album's lyrics, artist Dan McPharlin created an image in the tradition of classic science fiction book covers. THE SWORD will also release a limited edition hexagon-shaped picture-disc 12-inch single for "(The Night Sky Cried) Tears of Fire".

"Warp Riders" marks the first release where the group has worked with an outside producer. Helmed by Matt Bayles (PEARL JAM, MASTODON, ISIS),the album is anchored by an epic science-fiction narrative. The storyline is a psychedelic space opera that explores temporal themes of death and rebirth. "Warp Riders" also finds THE SWORD expanding its range from pure metal to include bone-crunching hard rock at large. Rather than dampening its sound, the band actually sounds more amplified than ever, spewing out some of its most scalding riffs to date and channeling an unearthly bellow from its low end.

Opening track "Acheron/Unearthing The Orb" begins with ominous, fog-drenched atmosphere before a flurry of nimble fretwork and galloping drums storm out of the gate. The energy doesn't let up once and by the final moments of closing cut, "(The Night Sky Cried) Tears of Fire", an intensely satisfying resolution sets in. Guitarists Kyle Shutt and John "J. D." Cronise execute punishing acrobatics while injecting melody at every turn. Bryan Richie's warm bass lays down the foundation and ripples with menace. Trivett Wingo's drumming explodes with the perfect balance of both precision and dexterity.

In a recent interview with Decibel magazine, THE SWORD guitarist/vocalist John "J. D." Cronise stated about the forthcoming effort, "This is what you'd technically call a 'concept album,' though I'd describe it as more of a soundtrack to a story I came up with. All the songs are about aspects of the story, but they don't cover every detail from beginning to end. It's a science fiction story, and it deals heavily with themes of light and dark and perceptions of time. One of the main settings is a planet, which has experienced tidal locking, creating a side of perpetual day and a side of perpetual night. The reason for creating a narrative to base the songs around was essentially to provide interesting and varied lyrical subject matter with a core theme to tie it all together."

Cronise previously told AOL's Noisecreep that "Warp Riders" will have a broader hard rock sound but stressed that the band's aim isn't to broaden its appeal outside of the heavy metal market. "If more people listen that's great, but we're not doing it for that reason," he said. "We are just more interested in expanding our sound for ourselves. If we wanted to expand our audience we should just remake the second album over again, rather than challenge people with something new."

THE SWORD's last album, "Gods of the Earth", was released on April 1, 2008 via Kemado Records.