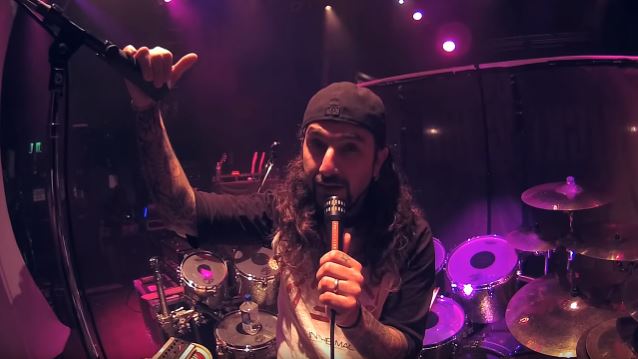 Gear Gods recently met up with Mike Portnoy (DREAM THEATER, AVENGED SEVENFOLD, THE WINERY DOGS) to talk about the kit he is using on the current THE WINERY DOGS world tour. Check out the footage below.

THE WINERY DOGS ' second album, "Hot Streak", debuted at No. 30 on The Billboard 200 chart, having shifted 13,000 equivalent album units in the week ending October 8.

"Hot Streak" was released on October 2 in North America on Loud & Proud Records via RED (a division of Sony Music Entertainment) and in the rest of the world via earMUSIC. It was preceded by the first single, "Oblivion", which was made available on August 25 at radio. A double vinyl edition of the new album is also in the works and is due out in early November.

In a recent interview with Artisan News, the members of THE WINERY DOGS were asked if there were any "sophomore jitters" prior to the making of the band's second album, "Hot Streak". Sheehan responded: "I don't think so. We were pretty comfortable. We've all done this a real lot. We've played in all kinds of situations, made dozens of records, done thousands of shows — literally. So, yeah, it's always a challenge when you sit down to a blank sheet of paper and you've gotta write something. But if you've done it enough, you know that eventually it will come; eventually, we'll figure something out. If one of us dries up, the other guy will pick up the slack, and vice versa. We've done it a lot, so we're never really nervous about it. We're excited about it, and I know when we start getting some stuff that we start digging, it's an exciting thing. But I think we're all past that point where we would be apprehensive in any way."

Added Portnoy: "I think a big difference is… When people talk about the sophomore slump — everybody says that — I think that applies to new, young bands, where it's their first time out. 'Cause the big joke is, a band's got their entire career to write their first album and then a couple of months to write their second album. But in our case, we only had a couple of months to write the first album as well. It wasn't like we were toiling in the basement of our parents' houses for five years before we got our record deal. So, to us, this second album, we made it the same way we made the first album. There wasn't any kind of difference. The sophomore-slump thing kind of doesn't really apply to the way we work."