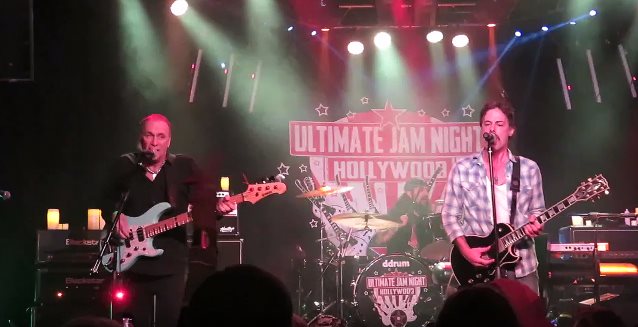 Fan-filmed video footage of THE WINERY DOGS' appearance can be seen below.

THE WINERY DOGS will release "Dog Years: Live In Santiago & Beyond 2013-2016" on August 4 via Loud & Proud Records. The set, which will be available in both standard and deluxe editions, is a collection of live concert footage, music videos, and an EP of previously unreleased studio tracks.

A standard two-disc edition of "Dog Years: Live In Santiago & Beyond 2013-2016" will be available which includes one Blu-ray disc of the 100-minute concert, eight music videos from the band's two albums, and the "Dog Years" EP on CD. A special edition five-disc package will consist of one Blu-ray disc, one DVD of the live concert material and the eight music videos, the "Dog Years" EP on CD, as well as two CDs of the live concert audio.

THE WINERY DOGS last year completed a tour in support of its second album, "Hot Streak", which was released in October 2015 in North America.

In a recent interview with All That Shreds, Sheehan said about THE WINERY DOGS' current status: "Right now [I'm] going to finish off this year with MR. BIG, and then we'll decide what our schedule will be for WINERY DOGS — how, when, where, what — and probably start writing at the end of the year.

"For WINERY DOGS, I think we're doing something smart up front, in my humble opinion anyway, not to be self-aggrandizing, but we're not going just to do album tour, album tour and album tour," he continued. "After 'Hot Streak', we traveled all over the world, we had a great run. We said, 'You know what? Let's take some time and get inspired so that when we come back, it will be fresh and new again.' Pretty much like those first two records, because we were still learning each other and learned things about each other and [we were] coming up with ideas that were fresh. So when you spend four years together, three or four years together, it's great to back off, and then when you come in again, it's all fresh and new, we've all lived lives. Richie is off doing his thing now, Mike's off doing his thing and I'm doing MR. BIG and a bunch of other stuff. When we get back together again, we'll have a whole big vocabulary of stories to tell as well as musical ideas that mean something to us rather than just forcing it out because the schedule says it's time for a record, and I think that's a wise thing that we're doing in THE WINERY DOGS, approaching it in that fashion. So I believe that we're going to wait until the end of this year to start writing and I'm always writing anyway. So I've always got a couple of pieces of music that I'm working on that [I think], 'This might work for WINERY DOGS,' or, 'This might be a MR. BIG thingy' or whatever. So we're always at it."