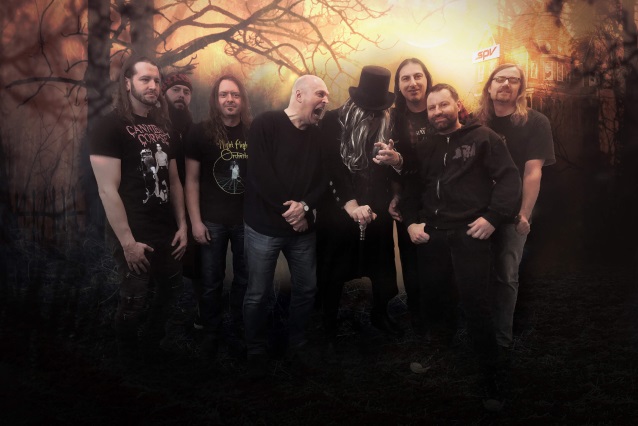 THEM Signs With STEAMHAMMER/SPV

The German-American band THEM is described in a press release as "one of the most remarkable and charismatic new metal outfits that Steamhammer/SPV have signed in recent years." The group's masterminds are American vocalist KK Fossor (ex-COLDSTEEL) and German guitarist Markus Ullrich, co-founder of prog metal band LANFEAR and member of speed/thrash metal act SEPTAGON as well as instrumental project A COSMIC TRAIL. American Markus Johansson (SYLENCER, 4ARM) is the second guitarist and the rhythm section features his two fellow-countrymen, bassist Mike LePond (SYMPHONY X, ROSS THE BOSS) and drummer Angel Cotte (DEMOLITION HAMMER). The lineup is completed by German keyboardist Richie Seibel (LANFEAR, IVANHOE). THEM's style consists of gutsy power/thrash metal with distinctly American leanings. The release of their second album, "Manor Of The Se7en Gables", has been announced for October 2018.

THEM was founded in summer 2007 by frontman KK Fossor and started out as a KING DIAMOND tribute band. The arrival of guitarist Markus Ullrich in autumn 2013 marked a change in the group's concept and a move towards their own material. Autumn 2016 saw the arrival of their debut album, "Sweet Hollow", accompanied by a tour through the U.S. and Canada alongside HELLOWEEN. The "Sweet Hollow" concept will now be continued in the twelve songs on "Manor Of The Se7en Gables".

Head of Steamhammer, Olly Hahn, has great confidence in the new SPV signing: "Thanks to their charismatic frontman KK Fossor and their extremely interesting concept it shouldn't take long for THEM to establish themselves at the very top of the metal scene," he says. "We're delighted to support them in achieving their goal."

Markus Ullrich is also thoroughly optimistic: "We're convinced that SPV is the perfect label to take the next steps with and turn THEM into an internationally acclaimed act."