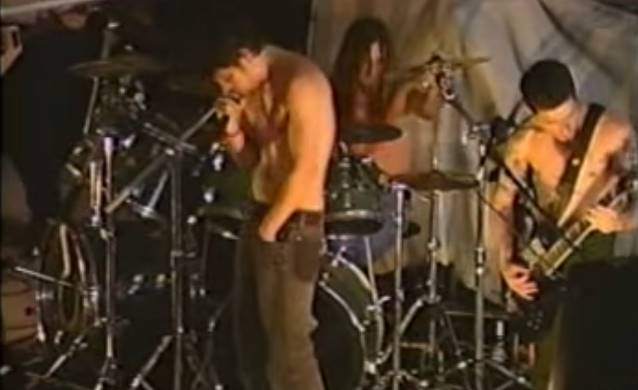 Cult Louisiana sludge/doom metal band ACID BATH, which broke up in 1997, has been the subject of reunion rumors after drummer Jimmy Kyle revealed in online posting that the band was searching for a new vocalist for a potential comeback.

"In response to [Kyle's] post by 'Acidbath The Bayou Kid' on June 3rd, 2014, I'd like to clarify a few things: Jimmy Kyle created that post without prior discussion with [guitarist] Mike Sanchez or myself.

"ACID BATH is not looking for a vocalist.

"There is no ACID BATH without [late bassist] Audie Pitre, so there will never be 'new' ACID BATH material.

"Currently, most of the surviving members of ACID BATH — Jimmy, Mike and myself — have been considering the possibility of doing some shows in the future as an ACID BATH tribute band, but nothing has been set in stone, and it is still just an idea. Unfortunately, [vocalist] Dax Riggs declines to be a part of such a tribute. We respect Dax and his decision.

"If we decide to put together an ACID BATH tribute band, the vocalist will be carefully chosen, but it is way too early to discuss choosing a vocalist at this time.

"I'd like to thank the loyal, diehard ACID BATH fans for their years of support, not just while ACID BATH was together, but for supporting us in all of our individual music projects."

ACID BATH released the underground classic "When the Kite String Pops" in 1994 and followed it up with "Paegan Terrorism Tactics" in 1996 before disbanding.