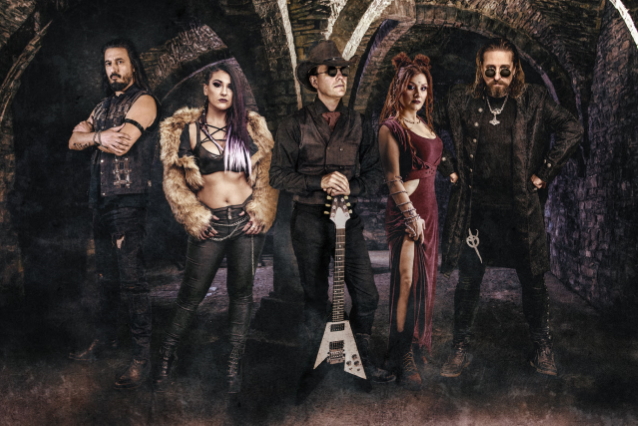 Sweden's symphonic metal pioneers THERION have released the official music video for the song "Die Wellen Der Zeit". The track is taken from the band's upcoming 17th studio album, "Leviathan", which is due on January 22, 2021 via Nuclear Blast.

Band leader Christofer Johnsson comments: "Once again we worked with Carlos Toro and Abyss Production in Chile. Carlos has done the previous seven videos for us over the past 10 years, and this may be the best one yet! The lyrics deal with the ancient Germanic worship of Nerthus and you will get some interpretations of the good old times in the clip."

The use of female vocals is another core ingredient of THERION today, which developed gradually. CELTIC FROST had basically introduced the female element to extreme metal on "To Mega Therion" in 1985. THERION began with both a female and male vocalist emulating a church like choir already in their sophomore full-length "Beyond Sanctorum" (1992). With "Symphony Masses: Ho Drakon Ho Megas" (1993) and "Lepaca Kliffoth" (1995),Christofer continued to developed his trademark sound by gradually drifting towards cleaner vocals and more keyboards. With "Theli", the Swedes had firmly established a reputation of pushing the boundaries of metal in the '90s — among such acts as their compatriots TIAMAT, THE GATHERING and MOONSPELL that were often referred to as "gothic metal" at the time.

THERION continued to break new ground leaving inspiration for others to follow in their wake: On "A'arab Zaraq - Lucid Dreaming" (1997),Christofer further explored the use of Near Eastern music in metal which he had already begun in 1992, while "Secret Of The Runes" (2001) dared to have Swedish lyrics in some songs. While critics were left confused and fans challenged, THERION were often ahead of their times and vindicated in hindsight. Even the band's 25th-anniversary excursion "Les Fleurs Du Mal" has by now overcome the initial shock the album caused and is only beaten in terms of streaming by the classic "Vovin" (1998).