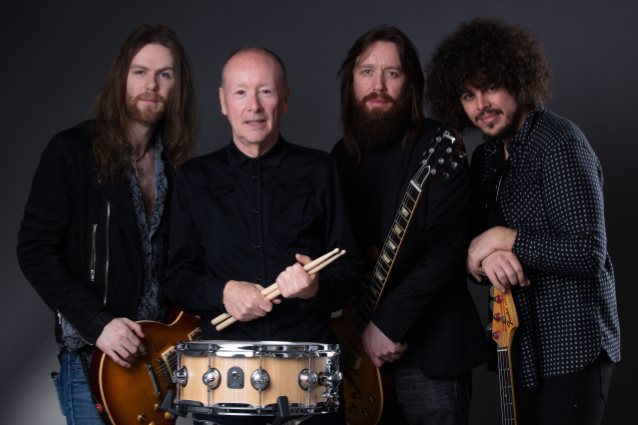 Brian Downey, known to millions of rock fans as the original drummer of THIN LIZZY, will play a rare concert at Nells Jazz & Blues in London on Friday, November 24 with his new band BRIAN DOWNEY'S ALIVE AND DANGEROUS. Tickets for the fortieth-anniversary concert of one of the greatest live rock and roll albums of all time, THIN LIZZY's "Live And Dangerous", go on sale on Friday, August 18.

2018 celebrates the fortieth anniversary of "Live And Dangerous". Although the album was recorded live in 1977 at London's Hammersmith Apollo and Toronto's Seneca College, it wasn't officially released until a year later in 1978.

Says Downey: "After the THIN LIZZY reunion shows finished in 2013, I was asked to join what turned out to be BLACK STAR RIDERS, but it just didn't feel right for me. In January 2016, following an appearance at the Vibe For Philo in Dublin, I approached Brian Grace and that's when we discussed getting a band together. After a few rehearsals, Brian suggested that we rehearse with Matt Wilson (lead vocals, bass) and Phil Edgar (guitar),both of whom had been in a band called the LOW RIDERS (their name was taken from a lyric from the THIN LIZZY song 'Johnny The Fox'). In January 2017, we jammed together at the Vibe For Philo, and it went so well, that we decided to form BRIAN DOWNEY'S ALIVE AND DANGEROUS and make it a full-time proposition."

Adds Grace: "I got hooked on THIN LIZZY's music at the age of twelve. I'm a huge fan of those songs. It's such a dream to be playing with the best drummer in the world! The musicians in the band love and respect the LIZZY sound that we really try and recreate it true to the original sound. We can't wait to perform at Nells Jazz & Blues in November. We're ready and on top of our game."

Downey's early musical influences came from his father who played in a local pipe band in Dublin. His '60s heroes included THE KINKS, THE BEATLES and THE ROLLING STONES. Downey met friend, co-founder and bass guitarist Philip Lynott, who attended the same school. Before forming THIN LIZZY, Downey had been in numerous school bands, including THE LIFFEY BEATS, MOD CON CAVE DWELLERS, and briefly THE BLACK EAGLES (with Lynott). He went on to perform in a local band, SUGAR SHACK, and in 1969, he was eventually persuaded by Lynott to join him in the band ORPHANAGE. ORPHANAGE included Downey, Joe Staunton (guitar),Pat Quigley and a guest member Terry Woods. ORPHANAGE didn't last too long, and towards the end of 1969 the guys were approached by Eric Bell, and formed THIN LIZZY. Downey and Lynott were the only full-time members of THIN LIZZY until they disbanded in 1983.

After Lynott's death in 1986, Downey played in the tribute THIN LIZZY lineup with John Sykes, Scott Gorham, Darren Wharton and Marco Mendoza, but had been absent from subsequent THIN LIZZY touring bands. After Sykes's departure in 2009, guitarist Scott Gorham created another lineup of THIN LIZZY. Downey, Mendoza and Wharton rejoined, along with two new members, guitarist Vivian Campbell and former vocalist from THE ALMIGHTY, Ricky Warwick. This version of THIN LIZZY started an extensive world tour in January 2010 and continued to tour until early 2013.