THIS ENDING, the Swedish death metal band featuring AMON AMARTH drummer Fredrik Andersson, has uploaded a 51-second video teaser for its second album, "Dead Harvest", due on January 30, 2009 in Germany, Austria, Switzerland and Italy; and February 2, 2009 in the rest of Europe via Metal Blade Records. Watch it below.

According to a press release, "THIS ENDING continue to deliver their own brand of death metal in grand fashion with 'Dead Harvest', evolving a dark concept and further distinguishing the band from its contemporary peers. Spanning from heavy riffs and mesmerizing melodies to blast beats and industrial sounds — 'Dead Harvest' has it all."

The recording of "Dead Harvest" saw THIS ENDING returning to Offbeat Studio in Stockholm, and after two months of gruelling work, the album was finally done. A number of songs were written for the CD but only 10 were selected to appear on the finished product. However, two songs that were recorded during the "Dead Harvest" sessions but that didn't make the final cut will be included on the limited first pressing of the European version of the album.

Commented guitarist Leo Pignon: "The second creation of THIS ENDING plunges you further into the darkness of mankind. Here you will find everything from spellbinding melodies to violent blast beats, all spawned from the maw of the inevitable doomsday machine that is THIS ENDING. 'Dead Harvest' is the soundtrack of a world in downfall, steeped in true death metal and branded with the unique sound of THIS ENDING. So crank up the volume, sit back, and watch the world go down in flames!"

THIS ENDING recently shot a video for the song "Parasites" over a two-day period at two different locations.

The band's debut album, "Inside the Machine", was released in Europe in December 2006 via Metal Blade Records.

Formed in 2005, THIS ENDING existed in a previous incarnation as A CANOROUS QUINTET. After several years of absence from the metal scene the guys decided that the time was right for a new era. Members of the band are/have been active in the following acts: AMON AMARTH, GUIDANCE OF SIN, NIDEN DIV. 187 and SINS OF OMISSION, among others. 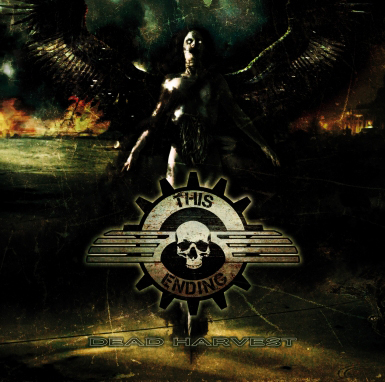